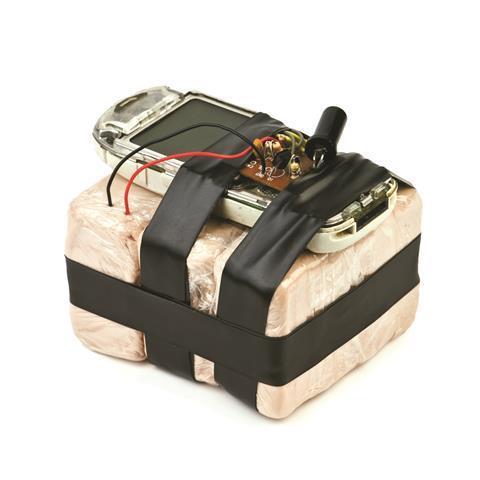 The threat posed by terrorist explosive devices and landmines are an unfortunate fact of life in many areas of the world. Explosive devices can be disguised inside everyday objects such as bags, shoes and even underwear. Security staff at airports and other vulnerable public places therefore depend on specialised scientific techniques to detect explosives and keep the public safe. The standard detection set-up is an X-ray machine for luggage and a walk-through metal detector. In some places, items of concern can also be swabbed and rapidly analysed using a portable mass spectrometry machine. Handheld metal detectors are normally used when searching for landmines but they are no use if the devices don’t contain metal. They also suffer from frequent false positives, setting off an alarm every time they encounter metallic rubbish. However, an interesting technique called nuclear quadrupole resonance (NQR) is showing promise in tackling some of these issues.

NQR is related to nuclear magnetic resonance (NMR) − a standard analytical technique in the chemistry lab. The principle of NMR is that certain nuclei (for example 1H and 13C) can have one of two different energy states in a static magnetic field. If you apply a radio frequency signal to a nucleus it will absorb energy when the frequency of the radio wave exactly matches the gap between its energy states − this is known as the resonance frequency. The frequency of radio waves that are absorbed depends on the type of nuclei present and the environment around it. This allows the structure of the molecule to be determined.

NQR makes use of something called the quadrupole moment of the nuclei and generally detects different nuclei from NMR. In this technique the energy of the nuclei are split by an electric field gradient created by the electrons within the molecule, and therefore an external magnetic field is not required. This allows these instruments to be simpler and smaller.

The prototype NQR detectors that have been developed work by bringing a radio oscillator coil near to the ground and scanning back and forth exactly like you would with a metal detector. At the same time the oscillator is scanning across the frequencies looking for a resonance frequency it recognises. When the coil passes over something that contains say 14N (for example in TNT and many other explosives) or perhaps 35Cl (for example in potassium chlorate, which can be used to make explosives), energy will be absorbed from the coil. The equipment detects the change and indicates which nuclei are present. However, NQR is not without its problems, and issues with selectivity, sensitivity and speed have prevented these detectors achieving widespread use so far.

Learn more about nuclear magnetic resonance spectroscopy and how it can be used to identify mystery molecules with SpectraSchool.

Learn more about nuclear magnetic resonance spectroscopy and how it can be used to identify mystery molecules with SpectraSchool (http://rsc.li/1vHNuHP).

In recent years there has been significant media interest in a bogus bomb detector, which its UK manufacturers claimed worked on NQR principles. Thousands of these handheld devices have been sold to the military around the world for many years. In 2009 concerns about the device appeared in the media, and in 2013 the manufacturer’s founder was imprisoned for 10 years for fraud. The fact that he got away with selling these devices for so long highlights the need for good science education and science ‘common sense’ at all levels of society.

A team at the University of Colorado, US, has developed plants that change colour in the presence of explosives.

A team at the University of Colorado, US, has developed plants that change colour in the presence of explosives (http://bit.ly/1yvW4W6).

Originally publlished in The Mole