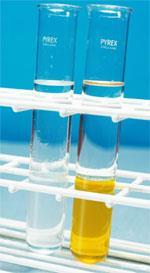 In 1925, Francis1 showed that some chlorobromoethane is produced when aqueous bromine reacts with ethene in the presence of sodium chloride, indicating that the bromine is added to the double bond by slow electrophilic addition before the rapid addition of the chloride ion:

While older A-level textbooks2,3 include this evidence for the mechanism, it is often omitted in more up to date revision guides that focus on examination requirements. This means that pupils may be taught the mechanism, often using the curly arrow notation, quite divorced from any experimental support. Even advanced textbooks 4,5 often concentrate on the stereochemistry of the reaction and omit the more elementary work. We believe that it is wrong not to present pupils with experimental evidence for what they are being taught and have modified the experiment to allow it to be performed in a double period.

Using methanol as the solvent and but-2-ene as the alkene has many benefits. But-2-ene is easier to obtain and handle and it is much more reactive than ethene, so the reaction can be completed in a much shorter time. In addition the 2-bromo-3-chlorobutane produced has a lower boiling point and density than 2,3-dibromobutane, allowing the two products to be distinguished. Methanol is preferable to water as a solvent because bromine is much more soluble in methanol than in water and methanol is less likely to produce addition side-products because it is less nucleophilic than water. However, the use of methanol means that lithium chloride should be used at the source of chloride ions as sodium chloride is insoluble in methanol.

As but-2-ene bubbles through the bromine solution and reacts with the bromine, the bromine adds across the double bond and so the solution changes from brown to colourless. This is why the decolouration of a bromine solution is used as an analytical test for alkenes. Reacting but-2-ene with bromine and lithium chloride gives two products of different densities, one of which contains chlorine, just as Francis found in 1925. Repeating the reacting with lithium bromine gives a layer of product, similar to the reaction with lithium chloride, but only one product - 2,3-dibromobenzene.

Make a saturated solution of lithium chloride in methanol by stirring 20 g of the solid with 100 cm3 of methanol and filtering the resulting suspension. Dissolve 2.6 cm3 of bromine (0.05 moles, use a measuring cylinder) in 25 cm3 of the methanol-lithium chloride solution in a boiling tube. Bubble but-2-ene gas through the bromine solution for about five to 10 minutes until the solution becomes colourless (Fig 1). Stand the liquid until it separates into two layers and isolate the bottom layer placing it in a 10 cm3 flask fitted with a 250°C thermometer and an air condenser (Fig 2). Add some anti-bumping granules and adjust the tip of the thermometer so that it is just above the surface of the liquid. Gently warm the liquid until it is refluxing and record the temperature. When cool, weigh 1.0 cm3 of the liquid to find its density. We found the values to be 143°C and 1.659 g cm-3. 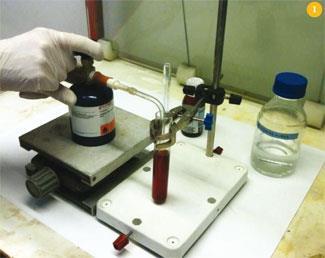 Repeat the above procedure using lithium bromide rather than lithium chloride. When performing this experiment we found the boiling point and density of this layer to be 151°C and 1.787 g cm-3, while quoted values6 ,7 for 2,3-dibromobutane are 158°C and 1.7893 g cm-3. This difference is presumably due to impurities, probably 2-bromo-3-methoxybutane formed by reaction of the carbocation with the solvent. We distilled the solution and the highest fraction boiled at 157°C confirming the product as 2,3-dibromobutane. While the boiling point and density of 2-chloro-3-bromobutane are not listed, the differences in the values give convincing proof that a different product is obtained when chloride ions are added to the reaction mixture.

To show that the organic layer from the lithium chloride experiment contains chlorine, take one drop of the layer and add 1 cm3 of ethanol and 1 cm3 of 1 mol dm-3 sodium hydroxide. Hydrolyse the halide by boiling the mixture under reflux for five minutes to hydrolyse the halide. Leave to cool before acidifying the mixture with 1 mol dm-3 nitric acid. Precipitate the silver halides with 5 cm3 of 0.1 mol dm-3 aqueous AgNO3 and shake with an excess of 1.0 mol dm-3 ammonia to dissolve any silver chloride formed. Filter off the undissolved silver bromide and acidify the filtrate with nitric acid. A faint white precipitate will form on standing which shows that some silver chloride had dissolved in the ammonia. The lithium bromide sample will show no sign of a precipitate when treated in the same way.

Methanol is highly flammable and toxic. But-2-ene is extremely flammable and toxic by inhalation. Lithium bromide and lithium chloride are harmful. Liquid bromine is very toxic and corrosive and, in addition to the usual laboratory clothing, chemical resistant gloves must be worn. A bottle of 1.0 mol dm-3 sodium thiosulphate should be available to neutralise any bromine spillages and the preparation of the bromine solution and addition of but-2-ene must be carried out by an adult using an efficient fume cupboard (Fig 1). 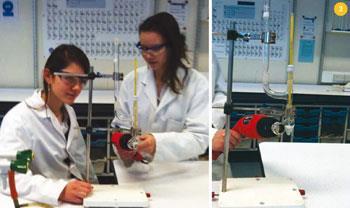 The boiling point determinations are most safely carried out by using a heat gun (Fig 2). The usual precautions must be observed for the disposal of the products of the reaction.

If gas chromatography is available, additional information can be obtained from the experiment. We used a Perkin Elmer Autosystem XL with a 30 m capillary column coated with dimethylpolysiloxane. The column temperature was 60°C and the nitrogen carrier gas pressure 15.0 psi. Samples of the bottom layers from the two preparations were analysed. The lithium bromide sample showed two peaks; these were presumed to be 2-bromo-3-methoxybutane (retention time 173 s) and 2,3-dibromobutane (retention time 185 s). The ratio of the areas of the peaks were 4 per cent and 96 per cent, showing that the principal product was 2,3-dibromobutane. The experiment was then repeated with a sample from the reaction mixture that had contained lithium chloride. Again two peaks were observed, with retentions times of 144 s and 185 s. The peak at 144 s was not methanol (which had a retention time of 101 s) and thus was likely to be 2-bromo-3-chlorobutane. The ratio of the areas was 23 per cent to 77 per cent, showing that the principal product was still dibromobutane. This surprising result shows that the bromide ion must have been preferentially captured by the carbocation, probably because it was trapped as an ion-pair in a cage of methanol. Under these circumstances, the close proximity of the carbocation and bromide ion would favour them combining together in the second step even though the chloride ion was in vast excess. 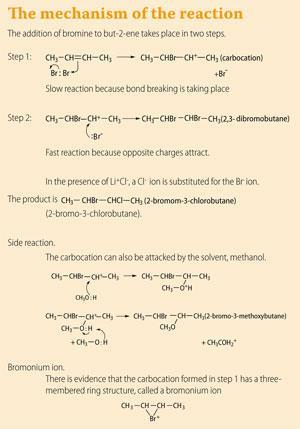