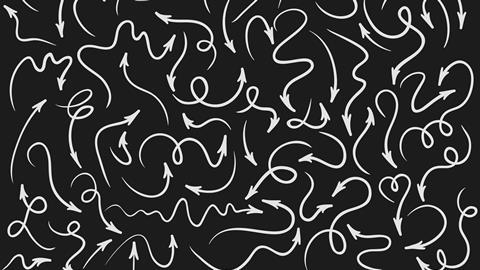 Chemistry students encounter between five and ten different types of arrow through their education. They all have different meanings, but how many of us actually point out to pupils explicitly what each arrow represents?

The curly or curved arrow, used as a model to represent the movement of electrons in organic reaction mechanisms, is a key concept for advanced students in schools and universities. Curly arrows actually have no basis in evidence beyond some basic kinetic studies. For pupils who may go on to study chemistry beyond school it is useful to stress that electrons are rarely as neatly packaged and definable as the arrow model suggests. They should not consider a curved arrow as a trajectory.

Pupils from 16–18 preparing for their exams tend to learn the arrows as patterns or pictures without appreciating the underlying principles. While this will lead to some success, pupils can no longer rely on this strategy as exam boards get increasingly creative in their question design. For example, in 2014 the awarding organisation AQA asked A-level candidates to use their knowledge of organic reaction mechanisms to complete a mechanism by drawing two curly arrows. The mechanism given was not one they studied, so candidates couldn’t simply recall arrows from a memorised pattern. Such questions are good discriminators between candidates so expect to see more of them.

There is understandable anxiety about drawing curly arrows in exams but clear guidance is given. Exam boards have sections in their mark schemes dedicated to what is and isn’t allowed. One thing that isn’t mentioned is the curve of the arrow. Theoretically, a candidate could draw a straight arrow, or even a loop-the-loop and still be credited, not that such representations should be encouraged.

According to exam mark schemes, how curved a curly arrow is doesn’t matter, athough the above representations shouldn’t be encouraged

Mark scheme appendices will have several pictorial examples of wrong arrows. They are worth photocopying and sharing with pupils so they know what not to do as well as the correct approach.