The periodic table is a fantastic scaffold for understanding the properties of elements and how those elements relate to their neighbours. However, for students beginning to learn about bonding, the properties of compounds can appear random and disconnected from their constituent elements.

What if there was a way to categorise compounds to help students make sense of their properties?

Organising the dizzying array of compounds into a visual representation analogous to the periodic table is possible. They can be sorted into just four groups based on the elements they are made from and the ways elements bond. The resulting ‘structure triangle’ groups compounds by physical properties beyond solid, liquid or gas. 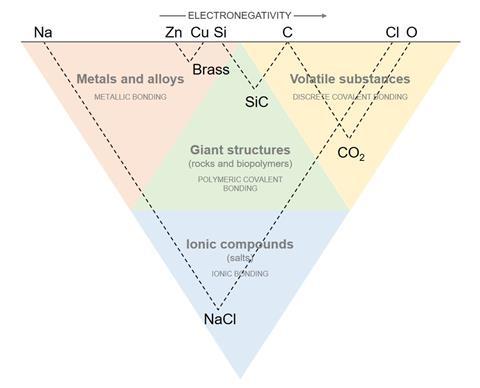 List elements horizontally by electronegativity with Cs on the extreme left and F on the far right. Construct a triangle by drawing lines from Cs and F. The apex represents the compound CsF.

From other pairs of elements, construct triangles within and with sides parallel to the first triangle. The apexes of those triangles represent the compounds each pair of elements create.

Caesium fluoride is totally unlike its constituent elements – the most extreme compound. It is within the group of ionic compounds. Try yourself and see it works for aluminium silicate (rock) and calcium carbonate (ionic).

Map compounds made from more than two elements by taking a weighted average of the points created by each single pairing.

The four areas of the structure triangle describe the kinds of compounds combinations of elements can produce, and the types of bonding between those elements.

Three categories (metals, rocks and polymers, and volatiles) contain both elements and compounds where structure and bonding of the compounds is similar to their constituent elements.

The fourth category (ionic) contains only compounds with ionic bonds. The structure and properties of these compounds are completely different from their constituent elements. In our everyday environment ionic compounds hardly feature compared with plastics, rocks and water but they tend to dominate introductory courses in chemistry.

Perhaps this over-emphasis of ionic chemistry perpetuates the idea that compounds have totally different properties from those of the constituent elements. In the other three regions of the structure triangle compounds are bonded in the same way as their elements, and properties are less differentiated.

For example, all non-metallic elements from groups 5 to 7 are volatile. When they react with another non-metal they form small self-contained covalently bonded molecules, just like the original elements.

You can show that compounds between similar elements retain the properties of the constituent elements. If you prepare the alloy NaK, you find it is liquid at room temperature and behaves like an alkali metal. If you warm an iodine crystal in a boiling tube full of chlorine (fitted with a Bunsen valve), you form the brown liquid iodine chloride, which looks and behaves like bromine.

If students are confused about the difference between ionic salts and volatile sugar, place a few grains in turn on fresh damp filter paper between two sheets of aluminium foil connected in a circuit. Only the ionic substances will conduct.

Keith Ross is a former teaching fellow at the University of Gloucestershire and author of Teaching secondary science. Now retired, he helps write chemistry videos for Fuse School.