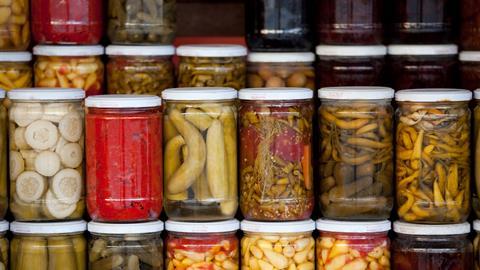 The science behind vinegar’s tangy goodness

It pickles peppers, eats through eggshells and (apparently) strips away skunk scent. What is it? Everyone’s favourite household acid: vinegar.

Vinegar is just ethanoic acid, or what you might know as acetic acid, diluted in water. Today, most ethanoic acid is made synthetically and used to make other important chemicals including plastics. But for thousands of years, it was only made biologically by microbes called acetic acid bacteria. This biologically produced acid is what we call vinegar and in fact, in the UK, it’s the only form of ethanoic acid that Trading Standards allows to be labelled as vinegar. Chip shops can’t just put synthetically made ethanoic acid in a bottle and call it vinegar – technically, that’s ‘non-brewed condiment’. Tasty.

To make what’s termed as real vinegar, you have to use the biological process, which is very similar to the one used for brewing beer. The acid-producing bacteria are round or rod-shaped bugs that flourish on the grapes and the barrels of wineries, where they spoil wine by turning the alcohol (ethanol) in it into acid. Wine-makers deal with this problem by keeping the barrels airtight, because starving the bacteria of oxygen keeps their numbers down. 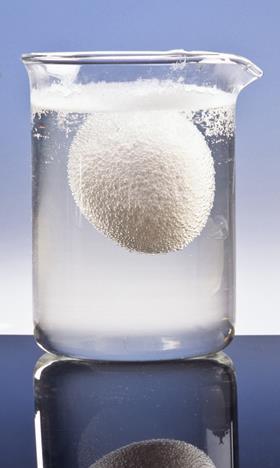 Vinegar-makers, on the other hand, encourage the growth of acetic acid bacteria. The process starts with fermentation of the sugars in grains, like in brewing. Then the yeast is skimmed off and the mixture is sent to an acetifier, where bugs start on the real business of turning ethanol into ethanoic acid. UK vinegar producers, Sarson’s, make their vinegar from malted barley, but rice and cider can also be used. It can take anything from a day to years to create the desired flavour, with some Italian balsamic vinegar producers maturing their vinegar for 25 years or more. The most expensive sells for €1000 a litre, meaning you won’t want to waste a drop.

So if you fancy getting experimental with ethanoic acid, choose regular kitchen vinegar. Try this: take a jar and fill it with vinegar, leaving a few centimetres at the top. Plop in an egg (unbroken) and leave it. Watch what happens over the next day or so. The first thing you’ll notice is bubbles streaming off the shell. Then froth will start to appear, sitting on the vinegar’s surface as scum. What’s happening? The acid in the vinegar is actually eating through the shell of the egg, which is made of calcium carbonate. The bubbles are carbon dioxide, one of the products of the reaction. Because ethanoic acid is a weak acid, it takes a while to work, but you’d see a much more aggressive reaction if you tried the same thing in a chemistry lab with hydrochloric acid. The reaction is similar to what happens when acid rain falls on limestone rocks. That’s because limestone rocks are also made from calcium carbonate and acid rain contains sulfuric acid, another stock acid used in chemistry labs.

Ethanoic acid is a weaker acid than both of these lab staples and in vinegar it tends to be very dilute. By contrast, strong acids like hydrochloric acid have to be treated with a lot more care. What’s the difference though? Chemically, it’s the positively charged protons in these solutions that make them acidic. Acid molecules are, by definition, hydrogen ion or proton ‘donors’. Hydrochloric acid readily splits up into hydrogen and chlorine ions in water, making it a strong acid. But ethanoic acid is more tightly bound, releasing hydrogen ions into solution much less easily. That’s why you can splash vinegar about in your kitchen without too much worry. 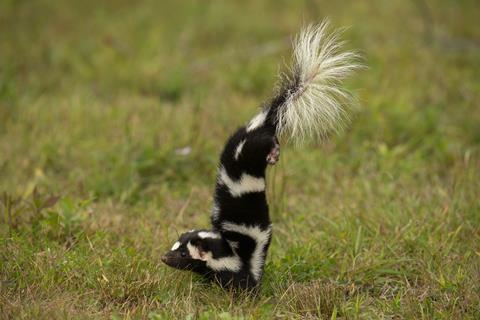 If you’re ever sprayed by a skunk, don’t worry – you can always replace the smell with vinegar

So vinegar’s weakness is actually its strength, making it incredibly versatile. We use it for pickling vegetables and sprinkling on salads without even having to wear gloves. It’s also well used as a cleaning agent and before pump action sprays, all sorts of household objects would be dunked in or scrubbed with vinegar to get the grime off. It even works for getting concrete off your hands and, according to those unlucky enough to know, removing powerful, rotten egg-type smells from your clothes – just a tip in case you’re ever cornered by a skunk.

Hayley Bennett is a science writer based in the UK