Barbecues should be banned: discuss...

Summer holidays are here. Time to light up that barbecue! Or not, argues Keith Taber... 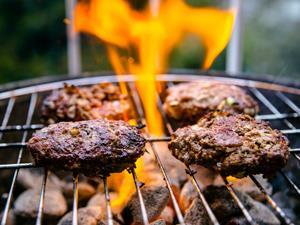 Researchers and teachers have developed a wide range of interesting contexts for exploring socio-scientific issues - where the scientific evidence and arguments are fundamental to exploring an issue, but have to be considered alongside extra-scientific considerations such as economic and cultural factors (e.g. Sadler, 2011). Socio-scientific decision-making needs to be informed by good science, but relies upon applying values that are external to science itself. An example would be the debate about whether to commission more nuclear power stations, which needs to be informed by, but can not be determined by, scientific and technical information. In that case, for example, science can give informed estimates of risks and potential outcomes of technical failures - but society has to decide what levels of risk are acceptable in different scenarios.

Nuclear power is a highly important topic, but may seem of little immediate relevance to some pupils. Perhaps some of these pupils might be engaged by a question that they can relate more directly to their own experiences and interests. I was wondering this afternoon if a good candidate might be a proposal that barbecues should be banned in built-up areas.

Imagine the scene. It was a hot sunny day, of the kind that seem too rare in England. It was too hot to be comfortable at work or on the bus home. But after a quick shower, it seemed an ideal time to sit out and enjoy the garden. After taking a few moments to watch the bees busy visiting the passion flowers I set up my laptop on the garden table and settled down to do some work in my own personal Eden.

Then it started - first it was just a smell as if someone had spilt some petrol. Then the nostrils twitched at the first recognition of the smoke - and soon great clouds of white billowed over the garden fence and down into my little sanctuary. I evacuate my little paradise before I start choking on the smoke, a kind of self-imposed exile as my punishment for the sin of wanting to enjoy the end of a rare sunny day. A neighbour’s barbecue spoils my afternoon and I retire inside to study, and close the window - whilst muttering something along the lines of ‘so much for the clean air acts.’

Now I readily accept that I’m unusual, and I’m biased. I’m unusual because I do not see the attraction of barbecues, and dislike them to the extent that I’d readily have a ban on them being lit in close proximity to other people’s property. I am sure my neighbour has no particular desire to have his smoke come into my garden, but physics and meteorology respect neither social intentions nor property boundaries. I am biased in two ways. For one thing I suffer from minor respiratory problems (rhinitis and borderline asthma) and inhaling smoke tends to lead to a swollen and sore throat and a sensation of clogged-up lungs. This sensitivity is not ideal for a chemist, but whenever possible I avoid smoke and other aerosols. Secondly, I am a vegetarian and find the smell of burning animal corpses as rather distasteful. Each to their own, but not in my garden, please.

So I have a personal motivation for suggesting students are asked to consider this topic. But what about the science? Well I’ve already alluded to the physical dispersion of the smoke by wind and diffusion. There is certainly  some interesting chemistry involved in theories about how we can recognise different smells in the smoke that these processes spread around - such as the initial smell of the fuel used to start the combustion process, and later of the burning tissues of the animals. This would form an interesting area for some internet searching. Then there are the health aspects - is there any actual evidence that smoke from barbecues actually can cause problems for asthmatics, or people with other forms of respiratory disease, for example. Also there are the environmental issues - is cooking in this way only more visible than normal, or is it less efficient than cooking inside - leading to unnecessary releases of greenhouse gases? Then there are more advanced issues about exactly what reactions occur when food is barbecued. Meat contains proteins - nitrogen compounds - and barbecuing is not a very controlled way of cooking. Besides the well-known risks of undercooking food that may be contaminated with pathogens, could there also be risks of overcooked and charred food containing potentially carcinogenic compounds? For that matter, what range of compounds from the burning meat are released in the smoke. I do not think I have ever seen definitive evidence that inhaling barbecue smoke could be linked to cancers - but then they would have been said that of burning tobacco before the research was undertaken. If there are uncertainties here, then what kind of scientific research would be needed to answer these questions?

So there’s plenty of science to be explored here - but also some extra-scientific aspects. A lot of people enjoy barbecues, and they provide a focus for social events.

So the barbecue question may not seem to be the most important socio-scientific issue we might pose our students, but I think it has a lot of potential. Perhaps if enough schools discuss it, it may even eventually lead to a ban on barbecues in built-up areas - or at least near my garden.