Acid lakes: do they exist and would they dissolve a boat? 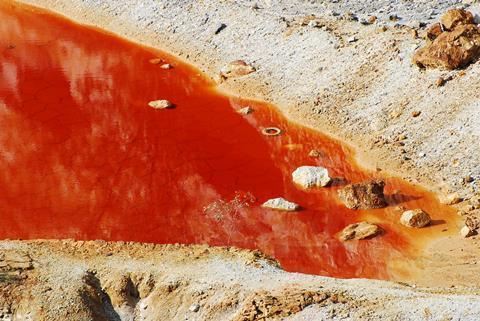 Could the lake turn to acid?

In the film Dante's Peak, the hero (a geologist played by Pierce Brosnan) accompanied by his girlfriend and some of her family find themselves threatened by red hot lava flows. All the roads are blocked by rock avalanches. In the panic they decide that the only way to escape is by crossing a large lake in a boat.

However, 'volcanic activity has turned the lake to acid' and, as they cross the lake, fish are seen floating dead on the surface and soon the boat starts to fizz! They just manage to get ashore onto the other side and the last we see of the empty boat is it slowly disappearing under the fuming waters! Are there such things as 'acid lakes' and would a boat really dissolve and sink as shown in the film?

A quick Internet search reveals that there are a remarkable number of real volcanic 'acid lakes' around the world. They are nasty mixtures of corrosive chemicals and virtually nothing lives or grows nears them. They usually exist in dormant volcanic craters - rather different to the scene depicted in the film.

But what about the boat? It is made by Valcro who make aluminium boats. Aluminium is also used for saucepans, bicycles, and aeroplanes. Aluminium is close in reactivity to magnesium (remember how brightly magnesium burns in air) and so chemically it may seem a rather odd material to make household items from. However, a nanometre-thick layer of aluminium oxide forms as soon as aluminium is exposed to air. This acts as a protective layer on the metal surface, which is hard to shift but acids can remove it and once through react strongly.

Acid lakes are formed by gases such as SO2, SO3 and HCl bubbling up from deep within the Earth, dissolving in the water and forming sulfurous, sulfuric and hydrochloric acids. Aluminium does not react readily with sulfuric acid because it is rendered passive but HCl or a mixture will react strongly.

In the film you can see the lake water is steaming - it's hot. In general a reaction rate will double for every 10°C rise in temperature. If the lake was hot, acid-metal reactions would greatly increase. If you put a piece of aluminium kitchen foil into dilute HCl nothing much happens. But if you heat it the acid is able to get through the oxide layer and then it really starts to fizz away. It's very like what you see in the film - basically plenty of bubbles of hydrogen gas coming off!

So if they did try to cross a hot acid lake in an aluminium boat I think it could have reacted quite quickly. The acids could have made holes in the old boat (perhaps opening up deep scratches or weakened rivets, joints etc) and then water could have got in and it would indeed have sunk.