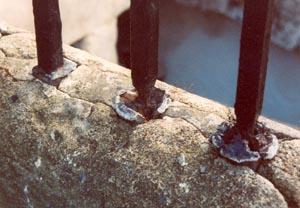 The effects of electrochemistry

Most people, walking around the beautiful city of Bath would be looking at the wonderful Georgian facades. Not the chemistry trailer however. Instead, you should look at the railings surrounding these great town houses, and especially at the point at which the iron railings are embedded in the Bath stone. (If you are a long way from Bath, much the same can be seen in other towns of the period and in many graveyards where large, old family graves are sometimes surrounded by railings.)

In order to fix the railings firmly in place, a hole was cut into the stone and once the railing was in place the gap was filled with molten lead. Lead was chosen because its low melting point (328°C) meant it was easy to melt on site. Unfortunately, lead was not a very good choice because it is much less reactive than iron and so the two metals in contact in the presence of (rain) water set up an electrolytic cell, with the more reactive iron acting as an anode. Electrons are lost and conducted through the bulk iron and lead.

The less reactive lead acts as the cathode. Electrons are transferred from it to water molecules in the presence of air.

The hydroxide and iron(iii) ions diffuse towards each other, forming rust.

The photograph clearly shows that the iron thins almost to a point where it enters the lead and sometimes rusts away completely.

Iron is denser than rust so the rust occupies a greater volume than the iron that it is replacing. (The density of iron is 7.86g cm-3 but I have not been able to find a reliable figure for the density of rust. Can anyone help?) The expanding rust exerts great pressure on the stone in which it is embedded. Eventually the stone cracks, as is also seen in the photograph. Actually, this is quite unusual - all you can often see is the concrete used to repair it.

The equations (1)-(4) show that the lead itself does not react as part of the rusting process. However, some lead is exposed to the air and although it is a relatively unreactive metal, it is slowly oxidised.

For most of its history, houses in Bath were heated by coal fires so there would have been a great deal of sulfur dioxide in the air. This would convert the lead oxide to lead sulfate which forms a white deposit.

This was visible at the time but is difficult to make out in the photograph. Modern pollution from car engines generates rather more nitrogen dioxide but this does not leave any deposit because lead nitrate, unlike the sulfate, is relatively soluble in water.