Peter Borrows takes us on a random walk through chemistry

Looking at these trees (fig 1), the poet in me sees a palm tree in the morning mist in the garden of a maharaja's palace; the chemist in me sees a liquid-in-gas colloid.1 Tiny droplets of water, floating in air, formed as the air cooled overnight and became saturated with water vapour. Because of the small size, there is little or no tendency for them to settle out. The slight pinkish/yellow tint is because this photograph was taken shortly after sunrise, so the sun was low in the sky. The colloidal particles are about the same size as the wavelength of light. They reflect light in all directions but the shorter (blue) wavelengths are scattered more and you see the transmitted light, ie the remaining longer (red) wavelengths, giving the sky a pinkish yellow colour. 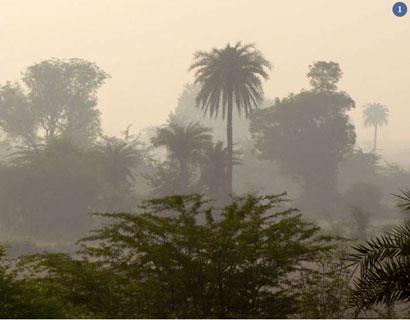 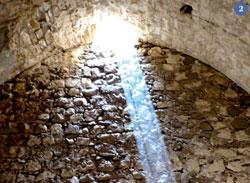 In fig 2 we can see a solid-in-gas colloid. There are tiny specks, mainly comprising sand in this case, floating in air. The sunlight streaming in is reflected off the dust particles, rendering the beam visible. If the lighting is right, you can see the individual specks moving around, carried gently by the currents of air, all moving first in this direction and then in that. Be patient, very patient, because just occasionally one speck makes a sudden, sharp, rapid change of direction, leaving its neighbours behind, as if someone had kicked it. And that is pretty much what happened, the 'someone' being an air molecule scoring a direct hit. This is Brownian motion, without smoke cells, without microscopes - visible to the patient, naked eye. A crusader castle in Syria gives a dramatic backdrop but chalk dust in a classroom can show much the same thing (but how many schools use chalk boards, these days?). 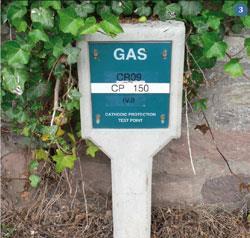 The first two photographs bring the chemistry out of an ordinary picture. This picture (fig 3), however, was deliberately photographed along the banks of the River Tweed at Berwick, near the border between England and Scotland, to record an item of chemical interest. The picture says it all: 'Gas. Cathodic protection test point'. There are two types of cathodic protection - a sacrificial anode2 or an impressed current. When iron rusts, iron atoms in the pipe lose electrons, becoming iron(II) and then iron(III) ions. The pipeline dissolves, unseen, under water, remote from the air. The iron is acting as an anode here.

If the iron is prevented fro becoming an anode it will be protected from corrosion. One way is to use another, more reactive, metal which is sacrificed in its place. This metal, usually a zinc alloy or magnesium, acts as a 'sacrificial anode'. It dissolves rather than the cathodically protected iron. Reaction (4) takes place rather than reactions (1) and (2).

Alternatively a direct current can be applied to the iron pipeline, making it the cathode, pumping electrons into the iron so that reaction (1) is forced from right to left. Whichever method is used, however, it is important to check the electrical integrity of the circuit from time to time. 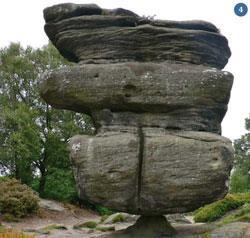 Corrosion and erosion are a recurring theme of chemical walks. Brimham Rocks (fig 4), in North Yorkshire, and the gargoyle (fig 5) from a church in Buckinghamshire are both made of sandstone - grains of sand (silicon dioxide, SiO2) held together by a natural cement. These cements can vary in their resistance to attack. Some are silicaceous, based on chemically resistant silicates; others are calcareous, based on calcium carbonate, which readily dissolves in acid (reaction (5)), whether carbon dioxide (reaction (6)) or stronger acids such as sulfur dioxide in polluted air (reaction (7)). 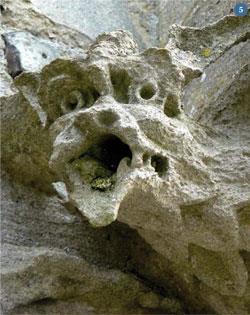 At Brimham Rocks the effect is a dramatic landscape; on the gargoyle it is a disappearing carving.