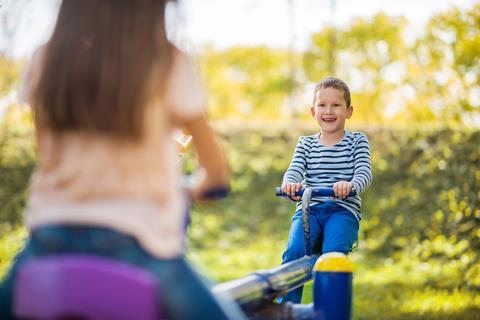 The second idea in our series is the principle that ‘a system in equilibrium that is subjected to a stress will react in such a way as to counteract the stress’.1 This is a qualitative principle to predict the outcome of any change made in pressure, concentration or temperature to a system that is in a state of equilibrium. The problem is that it can fail to make the correct prediction in two out of the three cases that it is intended for, namely pressure and temperature changes.

To predict what happens when the pressure of a system is increased, a student might imagine a balloon filled with gas whose pressure is being increased by squeezing the balloon down to a smaller volume. The student might be justified in thinking that the system would react by increasing its volume to oppose the initial reduction in volume. This would of course be an incorrect prediction since it is known that systems proceed in the direction of volume decrease, following any increase in total pressure.

To educators, it might appear as a legitimate manoeuvre to rescue the wording in the supposedly guiding principle, and many inform students that what was intended was a pressure increase without a change in volume and that this has been the cause of the incorrect prediction. But this might only serve to confuse students further.

When the temperature is raised in a reaction at equilibrium, students might be excused for thinking that the reaction should proceed in the exothermic direction to oppose the applied increase in heat energy. Again, this is an incorrect prediction since it is endothermic, rather than exothermic, reactions that are favored by temperature increases. Part of the problem lies in the precise wording of the principle. Many textbook authors attempt to solve the problem by changing the wording to say precisely the opposite of Le Châtelier’s principle, such as that the equilibrium shifts to ‘accommodate’ the change.2

To make matters worse, no two textbooks give the same statement. Admittedly, this alternative wording seems to fix the problems in that students can now argue that an increase in pressure on the balloon, by means of reducing the volume, will indeed result in volume decrease being favoured. Similarly, in the case of raising the temperature, the student is now supposed to argue that raising the temperature will result in favouring whichever direction results in an uptake of the added heat, namely the endothermic direction, in full accordance with the experimental facts.

Perhaps it is time to retire Le Châtelier’s principle as a whole. Instead, the equilibrium constant for pressure, Kp, of a gaseous reaction can be calculated. Substituting for the partial pressures of each component gas in the equation – the product of the mole fraction for each component and the total pressure – this shows unequivocally that increasing the total pressure results in a greater mole fraction of the substances that accompany a volume decrease, on moving from left to right in the reaction equation. This is done in many university level textbooks and owes nothing to the confusing Le Châtelier’s principle.3

It follows from this expression that, for exothermic reactions, the equilibrium constant decreases as the temperature is increased and as a result, the reaction, as written from left to right, is not favoured by raising the temperature. Again, this is being done without appeal to Le Châtelier’s highly unreliable principle.

Curiously, in the case of concentration changes, the wording in the principle seems to work well, adding to the confusion. Consider what happens when the concentration of substance A is increased in this reaction:

According to Le Châtelier’s principle, the system should act to oppose the increase, consuming the additional amount of A, which it does. In this case, the observed change does indeed seem to be a genuine opposition to the applied change. But a principle that claims to predict what happens on the application of three types of changes, and only succeeds clearly in one of the three types, would seem to be counter-productive.