Get me a flask, any flask

In this issue: get me a flask, any flask 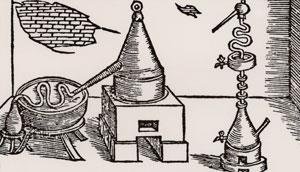 There are many kinds of flask used in chemistry - some going back to the days of alchemy - but unlike beakers many of these flasks have their own names. So when you ask for a flask you really need to specify what sort you want. Flasks and flagons were containers in everyday use, often with a narrow neck, and used for transporting and dispensing liquids. A common shape used in classical times was that of the amphora, which was used in many sizes for all kinds of liquids and whose lineal descendant is the pear-shaped flask used in distillation. Amphorae don't stand up well by themselves, due to their pointed bottom. However, they pack together quite well and ancient shipwrecks have been found stuffed with amphorae, some with their contents intact. Originally these were made of clay-based ceramic, but the Romans also made amphorae out of glass.

A flask by any other name

The Büchner flask or filter flask (and associated funnel) is a heavy-walled conical flask with a sidearm used for filtering under reduced pressure. It is named after the German chemist Ernst Büchner (1880-1967), so we should really call it a Büchner flask. The flask is also known as a Kitasato flask in some circles after the Japanese physician Kitasato Shibasaburo (1853-1931) who co-discovered the infectious agent of bubonic plague. The German Emil Erlenmeyer (1825-1909), invented and gave his name to the Erlenmeyer flask, which is conical with a flat bottom, and crossing the Erlenmeyer flask with a beaker you get a fleaker with its straight sides that curve inwards to form a narrow neck to assist pouring.

Woulfe's bottle or flask is a two- or three-necked flat-bottomed bottle used for washing gases named after the Irish chemist Peter Woulfe (1727-1803). Edmund Drechsel (1843-1897) bettered the design with his Drechsel bottle in 1875 but strictly speaking the device is a stopper - one with a long gas inlet and an outlet that prevents suckbacks. Other named flasks include the Pasteur or swan-necked flask invented by Louis Pasteur (1822-1895) to demonstrate that spontaneous generation does not occur and the round Florence flask, supposedly named after Florence, Italy.

Flasks are often used for distillation and a special distillation flask with a characteristic long neck was called a retort, from the Latin retortus meaning bent back, as the neck served as a condenser. The use of retort for a remark that is sent back in reply comes from the same root. The word retort is used today for any distillation vessel although copper whisky retorts are also called pot stills. An old name for a simple still, consisting of two connected retorts is an alembic, although the alembic is actually the lid or still head that connects the two vessels.

Another unusual distillation flask used by the alchemists for refluxing was known as a pelican, and these can still be bought, although they don't feature in most laboratories. The pelican was used in alchemy to signify renewal and the pelican was named after its resemblance to the pelican's neck.