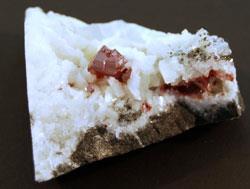 As we have seen before, the English language is rich with words for various colours, and often these words have a chemical connection. In this Chemlingo we will look at words for red.

A bright red pigment used for centuries was vermilion, used for example in illuminated manuscripts, which we also use as a word for that shade of red. The pigment is obtained from the mineral cinnabar, which is mercury(II) sulfide, HgS. Vermilion is often called china red and most of the natural cinnabar comes from China.

The connection here is cochineal, a red dye obtained from insects. Modern cochineal comes from South American insects. These were brought into Europe in the 16th century by Spaniards and replaced the kermes vermilio insects, which live on kermes oak trees.

Carmine also means insect-produced (via Sanskrit and French carmin) and describes the same cochineal dye. So carmine and cochineal are actually the same. Interestingly, I learnt that both the Welsh for red, coch, and the modern Greek kokkinos for red, both come from cochineal.

Crimson comes from Old Spanish cremesin, which derives from the Sanskrit krmi-ja, also meaning produced by a worm and refers to the natural dye produced from a worm. So crimson, cochineal, carmine and vermilion are all interrelated words with an insect connection. This is interesting as cochineal is used as a safe food dye. Does this mean that cochineal is not suitable for vegetarians?

Sometimes coloured pigments are inorganic (like cinnabar) and sometimes organic - in both senses of the word, carbon-based molecules which are obtained from plants or animals - like cochineal.

Iron(III) oxide has been used as a red pigment for thousands of years and is referred to as red ochre. It is obtained from red clay and gives the characteristic colour to bricks (brick red). Finely ground iron(III) oxide is also known as haematite after its resemblance to the colour of blood. It was used as the cosmetic rouge, (from the French rouge, meaning red) to redden cheeks and also as jeweller's rouge for polishing precious stones.

Interestingly the Latin for red ochre is rubrica, from which we get our word rubric and originally referred to annotations in red ink on manuscripts giving directions. Hydrated iron(II) oxide, commonly called rust, also gives us a colour name, 'rust coloured'.

Blood red is named after the iron-containing pigment haemoglobin, a colour almost guaranteed to make strong men faint. English army uniforms were dyed red, so that the blood would be less visible in battle. This is the reason why English soldiers were known as redcoats.