Peter Childs, University of Limerick, investigates words in chemistry. In this issue: hygrometer or hydrometer? 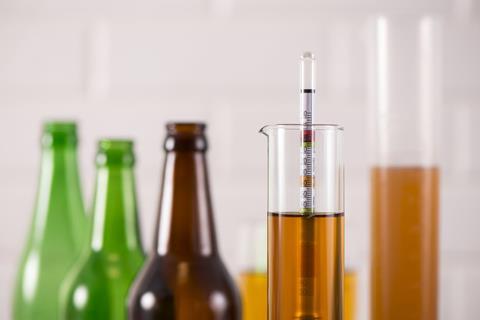 Do you know the difference between a hygrometer and a hydrometer? A hygrometer measures humidity, the amount of water vapour in air. A hydrometer, on the other hand, measures the density or specific gravity (SG) of a liquid by floating in the liquid. The word hygrometer is derived from the Greek hygros  meaning wet or moist, whereas hydro- comes from the Greek for water, hydro  (as in hydrated and hydrogen).

Hygroscopic describes the ability of a substance to pick up moisture from the air and a hygroscope is an instrument for detecting changes in humidity. Humidity comes from a Latin root humidus  meaning wet or moist, from the verb humere  meaning to moisten. From this we also get humectant, which is a substance that keeps things moist by retaining water, for example glycerine stops toothpaste drying out when you leave the top off. A humidor is the opposite of a desiccator. A desiccator is an apparatus to keep things dry while a humidor is an airtight container that keeps things moist, for example cigars.

Initially, you might think a hydrometer was something that measured water. However, the instrument is used, for example, to measure the alcohol content or sugar content of beverages, or to measure the sulfuric acid content of battery acid. A gravimeter is an instrument for measuring either gravity or relative density, from the Latin gravis  meaning heavy.

An early hydrometer was invented by William Twaddle, and thus specific gravity is often measured in degrees Twaddle, °Tw. The unit is used for liquids denser than water and 0 °Tw = 1.00 SG and you can still buy Twaddle hydrometers. Another unit used for measuring the specific gravity of liquids, particularly sugar solutions, is the Brix unit (°Bx), named after Adolf F. Brix (1798-1870). A sugar content of 20 °Bx, in grape juice for example, corresponds to 11 per cent alcohol after fermentation. The Germans and Swiss use degree Oechsle (°Oe) to measure the sugar content of must, from which wine is produced. Brewers use the Plato scale, named after the German brewer Fritz Plato, to assess the sugar content of wort (grand malt), where 1 °P corresponds to one weight per cent fermentable sugars.1  When a hydrometer is used specifically for measuring sugar solutions it is also called a saccharometer, which comes from the Greeksakkharon meaning sugar, via the Sanskritsarkara  for sugar.