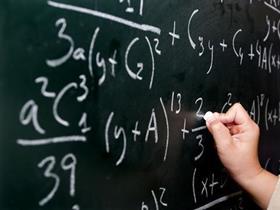 Chemical equations can be a difficult concept for pupils starting chemistry. One reason cited is because it 'cannot be learnt logically'.1 However, this problem can be overcome by teaching chemistry progressively, starting at the macro-scopic level and working down to the atomic and the subatomic levels.2

Teachers can start by introducing their pupils to reactions, eg:3

This summarises what happens when tin is heated for a long period in air (a grey dross is formed initially). Here the plus sign means 'and' and the arrow 'give'.

Once the active component of air has been identified, and the concept of an element established,3 this reaction can be written as:

Here I have used a system of nomenclature that does not require knowledge of chemical formulae, which come later. The suffix 'ic' indicates that an oxide contains more oxygen than another denoted by 'ous'. (This nomenclature is still used for common acids.)4

The law of conservation of mass gives an equation for reaction (2):

Here the mathematical symbols have their usual significance ('plus' and 'equals' respectively). The repeated phrase 'mass of' may be taken as understood so that:

Once the atomic and molecular theory has been established,2 molecular formulae, eg O2, O3, and empirical formulae, eg (Sn), (SnO), (SnO2), can be assigned.

In these examples, the symbols O and Sn represent atoms. Molecular formulae give the atomic com-position of molecules, empirical formulae of formula units. The latter are used for non-molecular substances. Chemists do not usually write empirical formulae differently from molecular formulae, but this is confusing to beginners, so it is better if the two types are differentiated.

These formulae enable us to write equations for reactions based on 'conservation of atoms'.5 For example, for reaction (2):

Equation (5) has the same number of atoms of each type on each side. This equation tells us that, in the reaction, one atom of metallic tin combines with one molecule of oxygen to give one formula unit of stannic oxide. Equation (5) thus differs from equation (4) in scale. The former relates to individual atoms, the latter to substances, ie to many atoms.

Reactions can also be represented at the atomic level by means of an arrow, eg:

A complication is that chemists often use this representation to express both the direction of a reaction and the equalities in equation (5). An arrow, however, does not always express equality, as in eg:

Teachers need to warn pupils about the different usages. Ideally, a combined symbol (⇒) would be better when both meanings are intended.

Electrolytes can be treated in terms of ions before discussing atomic structure.2 Consider the reaction between HCl (solution 1) and aqueous NaOH (solution 2):

This can be written:

The process thus involves dilution of Cl- (aq1) and Na+ (aq2) and the reaction:

Here numbers are used to indicate that the reaction involves mixing two solutions. There is then no confusion with reactions within a solution, eg:

In equations (10) and (11) atoms and total charge number are conserved.

However, very few electrolyte solutions are completely ionised, except at very low concentrations.2 For example, cupric sulfate is only ca 50 per cent dissociated at 0•01M and 20 per cent at 0•1M. This makes it difficult to represent reactions in such solutions. Chemists sometimes cite the predominant species, sometimes convenient ones. In the latter case, the formulae are best placed in inverted commas.

Extension of this approach to the subatomic level is straightforward. Ordinary chemical reactions involving isotopes can be written as equations expressing conservation of nuclides. Equations for nuclear reactions express conservation of atomic number and mass number (but not mass, which changes according to Δm = ΔE/c2).

Dr Peter Nelson is a lecturer in the department of chemistry at the University of Hull, Cottingham Road, Hull HU6 7RX.