Let’s place women at the core of every chemistry curriculum

Learning about women chemists’ contributions to chemistry – past, present and future – should be integral to all curriculums and exam specifications, argues Helen Harden

Recently, having played through some newly purchased flute music, I was overwhelmed by a wave of emotion. I was initially baffled as to what triggered this response. The answer was simple: I had glanced at the composer and seen I was playing a piece by ‘Anna’. And in that moment, I realised I had never played a flute piece that was written by a woman and that that really mattered to me. 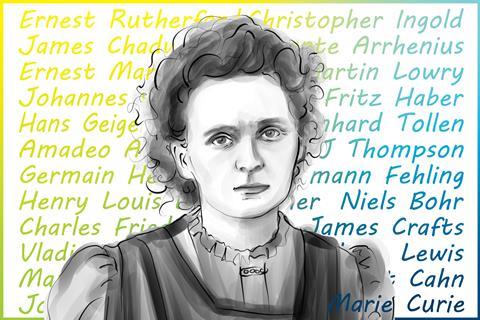 Ever looked at the names included in exam specifications? Well, here they are: all men. How do we give women, like Marie Curie, their place in this line-up?

In contrast to when I was learning to play, music exam lists are now far more representative, but can the same be said for the chemistry curriculum? Is it possible for today’s girls to pass through their chemistry education without encountering any examples of female chemists, as I did? My initial view was quite possibly yes because, looking through some example exam specifications and curriculums, I didn’t see any women’s names. Whether a girl encounters examples of women chemists will depend on whether her teachers go that extra mile to share hinterland stories about women chemists, or to provide role models of women working in chemistry today.

If no musician should be taught repertoire made up entirely of male composers, then today’s students should not be taught a curriculum that includes entirely male chemists.

How did our chemistry curriculum become so male dominated?

Through my research reading for the Best Evidence Science Teaching project, I have been discovering how the chemistry curriculum is intrinsically linked to the historical development of chemistry. For example, one paper recounted how, as new ways of describing acids and bases were introduced, they were added to the chemistry curriculum without removing earlier models. As part of this process the names of Johannes Brønsted, Martin Lowry and Gilbert Lewis have become immortalised in chemistry curriculums. Even when an exam specification does not specifically require recall of the work of specific scientists, their names are part of the subject content.

One significant impediment to improving the representation of women in the chemistry curriculum is that processes, elements or units are almost always named after men. Even the unit of radioactivity, the Curie, was officially named after Pierre Curie, although later some claimed it was named after Marie Curie as well.

How can we improve the representation of women in school chemistry?

It is not easy to include more women as part of the chemistry content of the curriculum, as the historical marginalisation of women means that the work of chemists such as Elizabeth Fulhame has become lost. When women chemists are remembered it is often due to their connection to a famous scientific man, for example, Marie-Anne Paulze Lavoisier, wife of Antoine. Some women’s places in scientific history, such as Rosalind Franklin’s, are now being recognised and even feature in some textbooks and resources, but they’re still not included in exam specifications. In the same way as pieces by previously neglected female composers are now being published, there is work to do to rediscover the achievements of these lost chemists.

One solution could be to modernise the chemistry curriculum so that more contemporary chemists become required learning. As there are many contemporary female chemists, this could improve representation. However, this approach still has difficulties. There is only so much that can fit in a chemistry curriculum. What would you take out? Historic discoveries and content are there for a reason.

Learning about women chemists is not an option but an entitlement

Alternatively, we could widen the curriculum. The Scottish Curriculum for Excellence Benchmarks include a topical science strand. One benchmark for 9–12 year-olds from this strand states that students should be able to ‘research historic and contemporary scientists (ensuring gender balance) and their scientific discoveries’. This ensures that learning about women chemists is not an option but an entitlement.

However, the inclusion of women chemists as an add-on to core learning risks giving the impression that women chemists are on the periphery instead of showing how their discoveries are integral to developing a greater understanding of the chemical world. Our aim, however challenging, should be to ensure integration of chemists that fully reflect the diversity of chemists in the real world in the core chemistry curriculum. Only then can we hope to truly inspire and inform future generations.

Inspired to share women’s contributions to science with your students? Show them these Faces of chemistry videos.