Marsh gas, or hydrocarbons on the heath

Take a walk on a marshy, boggy area of heath or moor land, for example the New Forest in Hampshire. There are shallow pools of stagnant water, with rotting vegetation at the bottom. No chemists worth their salt go for a walk without pH paper, so test the water - it is weakly acidic. Often, you will see bubbles on the surface. Occasionally, you may see the rainbow colours of an oily film on the surface, like petrol spilled on a wet road. This suggests long hydrocarbon chains. 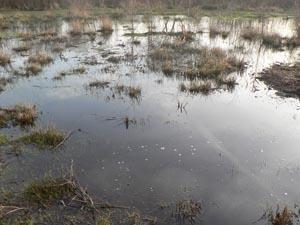 Stir the bottom with a stick. More bubbles rise to the surface. With care, this gas may be collected by using a plastic bag filled with water. It does not matter too much if a little air is collected as well. Set fire to the gas you have collected. It burns if there is at least 15 per cent of the gas by volume, or it will explode if there is less than 15 per cent but more than 5 per cent.

You have collected marsh gas, methane, made under strongly reducing, anaerobic, conditions. Because we think of natural gas as a fossil fuel, made millions of years ago, it is worthwhile students seeing that the process still continues today.

In Manchester there is a painting by the English artist Ford Madox Brown of John Dalton (1766-1844), the former schoolteacher and originator of the modern atomic theory, collecting marsh gas. He stuck a hollow cane into the marsh and used it as a delivery tube. Interestingly, today's chemist in the field can use a very large molecular mass hydrocarbon, poly(ethene), as a collection vessel to trap the smallest hydrocarbon, methane.

In marshy areas I have often seen an oily film floating on the surface of the water. I suspect this is a liquid hydrocarbon formed by similar reactions to those which form methane, ie as well as methane, traces of larger molecular mass hydrocarbons are also formed. This may be a good opportunity to persuade your students that there are still many questions for chemists of the future to answer.

There are many stories in marshy areas of will-o'-the-wisp, jack-o'-lantern or strange ghostly apparitions. At one time some people believed that these were the souls of dead children looking for their parents. Actually, this eerie light is burning marsh gas but that begs the question as to how the gas ignites. The auto-ignition temperature of methane is 537ºC so it is not catching fire spontaneously but marsh gas is not completely pure methane. Other hydrides can form too, eg phosphine, PH3. However, this will not ignite spontaneously at ambient temperatures any more than methane, but diphosphane, P2H4, does. This could then ignite the methane.

Diphosphane forms the basis of self-igniting flares, used at sea, where it is made by the action of water on calcium or magnesium phosphide, Ca3P2. (Calcium carbide, CaC2, is also present in the flares. It makes ethyne, C2H2 (acetylene) which is ignited by the burning diphosphane.)

Although it is thermodynamically implausible that, under biological conditions, highly oxidised phosphate ions (PO43-) could be reduced and two phosphorus atoms joined together to form diphosphane, it seems that there are certain bacteria capable of doing just that. Nature is a much better chemist than we are - so far!