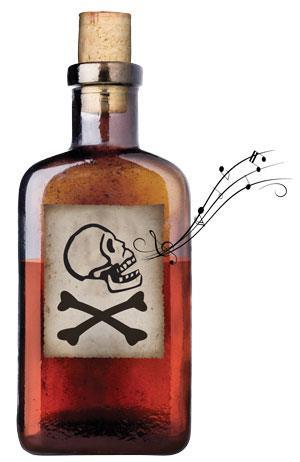 In many films and TV thrillers someone gets poisoned and they die instantly. But could a poison really kill someone so quickly?

In the film Murder ahoy - Agatha Christie's Miss Marple classic - a woman is seen murdered instantly when she injures her hand on a mouse trap coated in curare. Curare, an extract of the South American plant Chondodendrum tomentosum, is a well-known poison. Centuries ago the native Indians used arrows coated with paste made from the plant to hunt animals. Once in the bloodstream curare acts quickly, blocking the transmission of nerve impulses to the muscles, which become paralysed and the animal dies of asphyxiation within minutes. However, the 'home-made' paste was impure so quite large quantities were required. To overcome this, rather than simply painting the poison on, the Indians cut long grooves into the arrow tips and filled them with the poisonous paste. As a result more poison entered the unfortunate animal and, because of the grooves, the poison did not get wiped off as it pierced the skin. In fact curare is only effective when introduced via the bloodstream through a cut but not when eaten. The Indians could therefore eat the kill without being killed themselves.

Back to Miss Marple's puzzle, and in fact there would probably not have been nearly enough of the poison transferred by the trap to kill the woman because much of the poison would have been wiped off as it entered her finger.

In films things are not always presented as they should be. In the TV series Heroes, for example, Sylar was allegedly drugged with a curare-laced drink. As we now know this poison is only effective when it enters the body via the bloodstream, so Sylar should not have been affected.

More recently, in the news, reporters suggested that Alexander Litvinenko was poisoned after a polonium-210 compound was slipped into his drink. Polonium emits α-particles, which when ingested would damage essential organs leading to a very painful and slow death (three weeks in his case). Yet even something apparently as 'powerful' as this is slow to respond - it doesn't kill instantly.

There are other poisons - certain varieties of mushroom and the plant deadly nightshade, for example. Even rhubarb has to be treated with respect because the leaves and other parts of the plant are rich in oxalic acid which is poisonous. But again, while these poisons would kill you, they do so only in certain circumstances - and not quickly enough for most Hollywood story-lines.