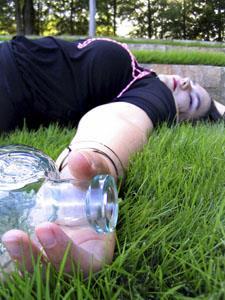 Out for the count

The phrase 'putting to sleep' has different connotations in an operating theatre and in a veterinary surgery, one temporary and the other permanent. For both purposes the same chemical agent, a narcotic, may be used - a low dose to induce sleep, a large dose to cause death. The word narcosis means a state of unconsciousness produced by narcotic drugs. Narcotics get their name from the Greek narkoum, meaning to make numb. Narcolepsy is a condition where people have an extreme tendency to fall asleep and its name comes from the Greek words narke, meaning stupor, and lepsis, which means an attack. Stupor, as in he fell into a drunken stupor, comes from the Latin word stupere, which means to be stunned or made numb, and is the root of stupid.

Laudanum was an early narcotic, first described by Paracelsus. Its active ingredient is an extract of opium from poppies, dissolved in alcohol to form a tincture. The origin of the word laudanum may come from the Latin ladanum, meaning a gum resin, since opium was often supplied and traded as a resin. Opium and opiate come from the Latin opium and the Greek word opion for poppy juice.

Modern anaesthesia dates from 1846 when William Morton used ether to knock out patients during surgery. The discovery of this ether-based approach to painless surgery was first called Letheon after the mythical waters of the river Lethe in the Greek underworld - a drink from the river made the souls of the dead forget their lives on Earth. Physician Oliver Wendell Holmes coined the term anaesthesia to mean without sensation from the Greek an, which means without, and aesthesia, meaning sensation. The term was made popular by James Young Simpson, professor of midwifery at Edinburgh University, from 1847 and then entered the medical vocabulary.

Before the introduction of ether and later chloroform, doctors used laudanum or alcohol to make patients insensible to pain. We talk about people losing their senses, either when they faint or when they are drunk. General anaesthetics shut down the central nervous system while a local one affects only the localised area. Either way general or local loss of sensation is the result.

To sleep, perchance to dream

The word soporific comes from the Latin sopor, meaning a deep sleep. We may also use the word trance for this state, which originally meant to be numb with fear and later took on the meaning of an insensible condition. Nowadays we associate trance with hypnosis but originally a hypnotic was a sleep-inducing drug and the name is derived from the Greek hypnotikos, which means to put to sleep or sleepy. Hypnos was the Greek god of sleep. Scottish-born physician Dr James Braid first used the term hypnosis in the modern sense, ie  to put someone in a hypnotic trance, in 1843.

Coma and comatose both come from the Greek word komatos, meaning deep sleep. Somnolence comes from a Latin word somnus  meaning sleep and a somnambulist is a sleepwalker. Sleep itself is Old English and dormant (as in seeds) and dormitory (a place to sleep) both come from the Latin dormire, to sleep. Putting a pet dormouse to sleep is thus a tautology and the rodent's name derives from its habit of hibernating for long periods.