You are what you wear

Does donning a lab coat mean more to us than we realise?

Despite my enduring love of graphic novels, I’ve never been much of a superhero fan. I’ve always felt characters like Superman or Spider-Man just aren’t very relatable. I mean, they came by superhuman powers by fate or accident. Even Batman or Iron Man have the superpower of infinite wealth, and their greatest struggle in life is coming to terms with being different from normal people.

But I fell in love with Alan Moore’s Watchmen – a dark story of superheroes (mostly) without superpowers. These characters are just flawed people – vigilantes – with silly costumes and silly names. Even so, when they put on those costumes they become heroes.

Clothes have power, perhaps even superpowers. Whether it’s a suit or a military uniform, what we wear affects how we think and act. I wonder if the connection between what we wear and our identity can explain some of the value of practical work in school labs. Perhaps it can even help us encourage students to become scientists. 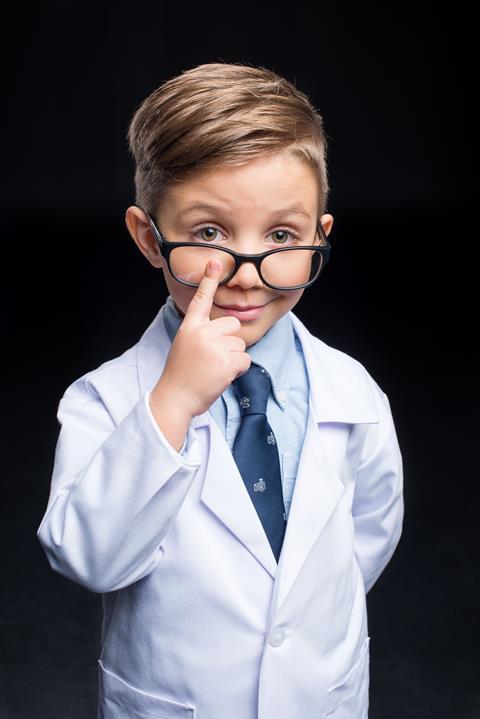 Psychologists call this effect enclothed cognition. In an early experiment, two groups of people performed a series of exercises designed to test mental agility. Both groups wore casual clothes, but only one group wore a lab coat over the top. This group made 50% fewer mistakes on the test than the first. Just wearing a lab coat boosted their performance.

A further two groups were both kitted out with lab coats to take the test, but this time the first group was told they were wearing painters’ smocks and the second was told they were wearing doctors’ coats. The ‘painter’ group performed with the same error rate as the earlier group wearing casual clothes, while the ‘doctor’ group showed the same performance boost seen in the first experiment.

A person’s behaviour and thinking is affected by the symbolic meaning they attach to the clothes they are wearing. In this case, associating the behaviour of high mental agility to the identity of a doctor or scientist.

More than dressing up

I’m not suggesting we give students lab coats in order to boost their attentiveness or mental agility, but maybe dressing like one nudges students towards feeling like they are a scientist, perhaps incorporating their behaviours in a lab into their own identity in some small way.

There’s growing evidence that there are ways to influence students’ decisions whether to pursue science. The influencing factors encompass relationships and experiences. Students given opportunities to experience science and to relate to scientists during their formative years are much more likely to pursue science as a career. Encouraging investigative practical work, or explicitly pointing out where students can apply the scientific method is important. Linking the work students do to the real life work of scientists wherever possible can also help.

But I don’t think anything can replace the experience of putting on a white coat and some silly goggles, and getting to grips with some glassware.

While the primary purpose of a lab coat and goggles must always be safety, perhaps in our classrooms they have a secondary role for students – to broaden their shoulders and feel like today they are scientists.