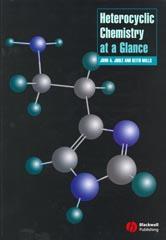 This book is aimed at second-, third- and fourth-year chemistry undergraduates. The study of heterocycles is an important topic in organic chemistry and this text aims to provide an accessible overview of the area.

Fundamental points on heterocyclic nomenclature, structures and common reaction types are concisely highlighted in the first three chapters. Reactions of the major classes of aromatic heterocycles are then covered (including reactions of pyridines, pyrroles, indoles and furans) and there is a short section on non-aromatic heterocycles. No practical details (such as solvent, reaction time and yield) or references to the original literature are reported, so that students 'can concentrate on the chemistry in question'.

There is a very topical chapter, Palladium in heterocyclic chemistry (including applications of the Sonogashira, Stille and Heck reactions) and I particularly enjoyed reading the chapters Heterocycles in biochemistry andHeterocycles in medicine. For these chapters it would have been useful to include references to more specialist texts.

A key feature of the book is that the material is well organised into small-sized sections. These present the material concisely in a logical order. The diagrams are also well reproduced.

Some important reaction mechanisms are highlighted, though often in abbreviated form (eg curly arrows showing the movement of electrons in some proton transfer, nucleophilic addition and nucleophilic acyl substitution steps are not included) and, in several places, detailed mechanisms for key reactions are not shown. Also, perhaps a second colour could have been used to emphasise important points of reaction mechanisms. One surprising omission is a section on problems/worked examples.

Overall, this is a useful book to add to the recommended reading list for undergraduate chemists. The book will be of particular use to those interested in understanding the importance of heterocycles in palladium-catalysed reactions and/or biological chemistry (including drug design).

Purchase Heterocyclic chemistry at a glance from Amazon.co.uk