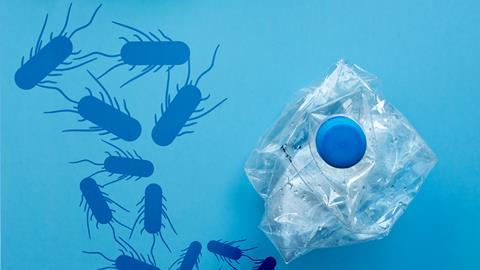 Use this starter slide with your class to give them a new context when studying the advantages of recycling.

Scientists in the UK have genetically engineered Escherichia coli to transform plastic waste into vanillin. Instead of simply recycling plastic waste into more plastic, the system demonstrates for the first time that you can use plastic as a feedstock for microbial cells and transform it into something with higher value.

Polyethylene terephthalate (PET) is one of the most widely used types of plastic. Most existing recycling technologies degrade PET into its constituent monomers, ethylene glycol and terephthalic acid, then repurpose them in second-generation plastic materials. The researchers want to upcycle these monomers into alternative products.

The researchers used genetic engineering to create a strain of E coli that converts terephthalic acid into vanillin. Vanillin is the molecule responsible for the characteristic smell and taste of vanilla. Traditionally it is extracted from the vanilla plant, but global demand far outweighs supply from natural sources.

Unfortunately, getting the cell to carry out the transformation was only half of the battle. A huge challenge is physically getting the substrate into the cell so that the chemistry can happen. To overcome this, the scientists added small amounts of alcohol that essentially poke holes in the cell membrane to increase its permeability. Another complexity was that vanillin itself is toxic to their new strain of E coli. To mitigate these toxicity issues, they removed the product from the reaction mixture in situ by extracting it into oleyl alcohol.