How to print a new nose 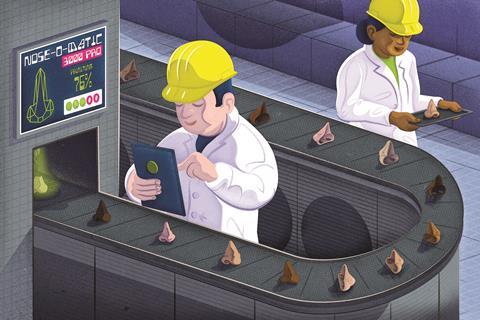 We’re familiar with the nose job, mostly through celebrity magazines’ fascination with famous people getting their faces ‘fixed’. Rhinoplasty, as it’s properly called, involves reshaping your cartilage – the flexible bit of your nose – sometimes by scavenging extra bits from elsewhere in your body. In the future, though, the nose job might look a little different.

Canadian scientists are already 3D-printing noses, not for celebrity nose jobs, but to help skin cancer patients. Though they haven’t implanted one into a person yet, that’s the next logical step. The technique is known as bioprinting.

Often, when someone undergoes facial reconstruction due to damage from skin cancer, the surgeon takes some cartilage from their ribs to implant in their face. This introduces a risk to the patient’s lungs that could be avoided by making and shaping the cartilage in the lab instead.

The smell of success

How do you make cartilage though? Well, researchers at the University of Alberta and Misericordia Community Hospital in Edmonton, Canada, did it by mixing real human nose cartilage cells (donated by people having nose jobs) called chondrocytes with a soft, collagen-based hydrogel. Collagen is one of the main protein components of cartilage, although the researchers used a form that is more common to skin and bone. Hydrogels are jelly-like materials containing polymers dispersed in water.

The idea of 3D-printing body parts, and specifically cartilage, is not new. In 2018, Chinese plastic surgeons described 3D-printed, ear-shaped frameworks that they used to grow new ears for children born with malformed ears, and actually implanted them into children. Like the Canadian researchers, they used chondrocytes, but these were spread over the framework.

In the new study, the chondrocytes and hydrogel together form a biological printing ink, or ‘bioink’. The 3D printer forces the bioink through a printing nozzle using pressurised air, building up the nose shape in layers based on a model created with computer-aided design (CAD) software.

Check out the EiC article 4D printing: the next dimension in healthcare and accompanying activity for 16–18 exploring some of the polymers used in 3D and 4D printing.

In both of these techniques, the cartilage has to be surgically implanted. However, another group of Chinese researchers has injected bioinks into mice, demonstrating that ears can be printed inside the body and getting around the need for surgery altogether. They also used a mixture of chondrocytes and hydrogel, but instead of extruding it through a printer nozzle, they remotely moulded it into a scaffold for the cells to grow on by shining near-infrared light on the mice in an ear pattern.

Near-infrared light does not penetrate deeply into the body so the non-surgical approach could work for ears and noses, though not necessarily cartilage in hips and knees.

Both techniques still need to be tested in humans and, no doubt, children and cancer patients with cartilage defects or damage will be first to benefit. But imagine if these advances also point towards a future of printable enhancements. Want to change your profile? Spend an hour with a cosmetic surgeon at their computer, as they design and print a new nose for you, then schedule your implant. It’s certainly a new look for the nose job.