The race for fast-charging cars 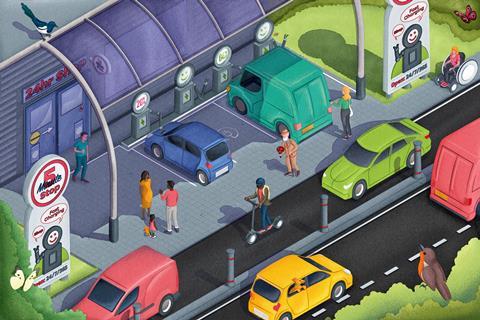 Fast-charging batteries could be a game changer for the mass adoption of electric cars. Ideally, you want to be able to charge your car up in the time it takes to pay and pick up a drink, just like you would at a petrol pump. Five minutes tops. This kind of rapid recharging poses some challenges to the designers of electric car batteries – challenges that battery designers are now racing to overcome.

When a lithium-ion battery is charging, positively charged lithium-ions are flowing from one electrode to another, where – in an electric vehicle – they accumulate ready to be discharged in driving mode. In essence, faster charging is about getting this flow of ions to happen more efficiently. However, there other sticking points. Lithium plating, for example: if too many lithium ions are trying to find space inside the electrode at once, they cause a pile-up at the surface and begin to be reduced and deposited there as lithium metal, forming needle-like projections. The needles are a problem for conventional negative electrodes made from graphite, reducing a battery’s storage capacity and power and potentially causing short circuits.

Pedal to the metal

Building lithium-ion batteries with electrodes made from different materials is one route to faster charging. Instead of graphite, some battery makers already use lithium titanate nanocrystals, which have a greater surface area – this increases charging speed, but comes at the expense of storage capacity. In the UK, Echion Technologies is using nanostructured niobium oxide in its batteries, which are capable of charging in six minutes, although they are still undergoing testing. Meanwhile, Tesla, the biggest all-electric car manufacturer, is working on faster-charging batteries containing cheap silicon electrodes.

Though sodium-ion technology is far less mature, it does promise fast charging

Israeli company StoreDot recently announced 1000 superfast-charging demonstration batteries had rolled off its factory production lines in China, ready to impress car manufacturers. The company swapped graphite for nanostructured compounds that allow faster transport of lithium ions into the electrode. They meet the magic five-minute pay-and-pick-up-a-drink target, but could still be made more cheaply by incorporating silicon.

Battery designers are also making bigger changes, switching out one alkali metal (lithium) for another that is more readily available: sodium. Though sodium-ion technology is far less mature, it does promise fast charging. French company Tiamat already produces sodium-ion batteries that charge in five minutes, although not, as yet, for electric vehicles. Currently, it is thought sodium-ion batteries may only be useful for short-range journeys.

It’s not just battery chemistry that poses challenges, however. The next generation of fast-charging car batteries will need faster charging points and power grids that won’t be overstretched as entire nations stop pumping petrol and start plugging in.