A day in the life of a research chemist at BP: Oliver WiIliams

Oliver Williams has been working as a chemist at the BP Technology Centre at Pangbourne for nearly two years on their graduate rotation scheme. He talks to Akshat Rathi about his typical day 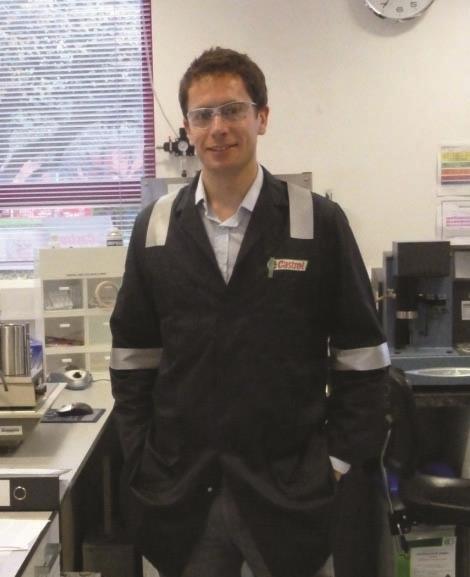 British Petroleum (BP), a global oil and gas company, is the third largest energy company in the world. BP’s headquarters are in London and in the UK it has research and development sites located at Pangbourne, near Reading, and Hull. Oliver Williams is a graduate chemist based at the site at Pangbourne.

The graduate rotation scheme is designed to give Oliver an exposure and understanding of everything that goes on at the Pangbourne site. As part of the scheme, Oliver previously completed nine months each in Engine Testing and Heavy Duty Diesel Engine Oil Development. He now works in Global Fuels and Lubricants Technology, looking at upcoming fuel and lubricant technologies and how BP can use them in their products.

Currently, Oliver works in the Research and Technology team. The team works on developing better biofuels and fuel additives, and they design experiments so that they can develop recommendations for future fuels – what properties new fuels should have or ideas of what to investigate next.

Designing experiments to investigate new fuels is very complex because there are many uncertain factors, including knowing how the fuel will react. Because of this, Oliver has to gain an in-depth knowledge of the necessary chemical literature in research papers and patents before starting to design his experiments. This is very similar to the research that Oliver did as a student and during his PhD and so he finds the skills and expertise that he gained while studying chemistry for his degree very helpful.

Oliver says he does not have a typical day. Sometimes he spends time reading about the latest science. He will also write literature reviews and suggestions for the team. At other times, Oliver plans experiments, which may be run by him or other associates at BP’s international research centres. He also has to manage the project that he is involved with, making sure that with so many people involved in it everything is being done by the right people at the right time.

The team Oliver works for is very interdisciplinary with physicists, chemists and engineers all collaborating on the projects. Oliver says that one of the most exciting times of the day is when the team have problem solving meetings and everyone brings a different perspective to the table. As BP often collaborates with researchers based in universities, Oliver is also looking forward to co-supervising a PhD student in the future, although he’ll have to wait until he’s made a permanent employee first.

Oliver enjoys the responsibility that BP has put on him and the freedom he gets working on projects. He is also proud of the work he does because it can potentially have a huge impact. So many people drive cars he says, that small improvements can yield big results.

2009–present, joined BP as a chemist on the graduate scheme

2005–2009, DPhil in organic chemistry at the University of Oxford

2001–2005, MChem in chemistry with 1st Class Honours at the University of Oxford