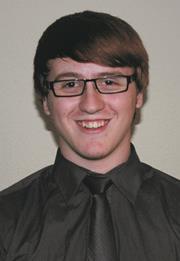 Enthusiasm is contagious, they say, and Joe Turton was certainly inspired by his secondary school science teacher’s enthusiasm for his subject. ‘I doubt I would have made the career choices I have without his influential teaching,’ Joe says. His teacher’s encouragement helped him to focus his curiosity and secure work experience at Fera (the food and environment research agency).

A series of fortunate events

‘I’ve been interested in science for as long as I can remember – I’ve always been curious about how stuff works and why. But I’ve never really known what I wanted to do; I’m just interested in everything, or nosy,’ Joe says. ‘I found out about apprenticeships through a series of fortunate events.’

During his work experience, Joe realised what he most loved about science was the practical work. Instead of spending years in classrooms and accumulating a debt that often comes with a university degree, Joe decided at the age of 16 not to continue on a traditional education route. ‘I stumbled onto the idea of an apprenticeship at a careers fair where local businesses and schools get together to promote themselves,’ Joe explains. Fera representatives happened to be at the fair and it turned out they offered apprenticeships. Joe applied and got a job.

During his three-year apprenticeship, Joe worked on different Fera projects at the Centre for Chemical Safety and Stewardship (CCSS), spending one day a week in a college, where he and other apprentices studied laboratory theory and completed assignments. The scientists at Fera’s CCSS find out what happens to chemicals in the environment, for example synthetic pesticides or manure fertilisers that come from animals that have been given a particular medicine. ‘The team figures out where a chemical goes and what it does once it has been introduced into the environment,’ Joe explains. They also find out how different chemicals interact with the living organisms they come into contact with – from the smallest of bacteria to insects, such as bees. ‘They don’t just investigate the negative effects of chemicals, some can be positive too!’

Working with the CCSS team has changed Joe’s perception of what scientists are like. ‘I expected a bunch of stereotypical scientists,’ Joe chuckles. ‘I was surprised that it was nothing like that at all; I met a group of very down-to-earth people.’

CCSS not only works with living plants and animals to find out how chemical compounds affect them, they can also predict toxic effects with their sophisticated computer modelling system

‘Completing an apprenticeship has helped me start a career at 16 in an area where people are often in their late twenties; this has given me an edge,’ Joe says. ‘I’d recommend an apprenticeship to anyone; it has the benefits of gaining practical experience and knowledge in real-life situations that are directly relevant to your career.’ Starting from the basics – how to use a precision balance or a pipette – Joe quickly moved on to more challenging techniques such as learning how to grow microorganisms and how to use a high performance liquid chromatography (HPLC) machine.

In 2014, Joe won the RSC’s Chemical Sciences Apprentice of the Year award, which recognises people working towards or having completed an apprenticeship with a strong chemistry basis. Apart from a cash prize and medal he received during an award ceremony in Manchester, Joe gained additional funding for his professional development.

The skills Joe learned during his apprenticeship helped him secure his job as assistant scientist at Fera’s CCSS. He now investigates how chemicals affect water organisms such as algae and freshwater shrimp. His work is important as chemical compounds that affect the development, growth or reproduction of even a single species can cause serious damage to whole ecosystems.

‘One of the main reasons I enjoy my job is the variety; no project is the same,’ Joe explains. ‘The theory might be similar but there is always a different challenge.’ Joe’s advice for young people starting their career is to find something they are really passionate about. ‘For me it was science,’ he says.

2014–present, Assistant scientist at the Centre for Chemical Safety and Stewardship at Fera

2011–2014, Apprentice laboratory technician at the Centre for Chemical Safety and Stewardship at Fera

Joe was initially interviewed by 175 Faces of Chemistry http://rsc.li/175-faces