With the rise of the computer in the classroom, the use of multimedia resources in teaching has become almost ubiquitous. However, even well-constructed animations can be misinterpreted if they are clearly narrated. It is important that we understand which visual elements of animations communicate the intended messages most clearly. Rosenthal and Sanger describe the outcomes of an investigation into students' ability to explain their understanding of a redox reaction after viewing two animations of differing complexity.

In their introduction, the authors allude to the difficulties students experience when learning chemistry, which are often attributed to working memory issues or problems switching between types of representation. Redox reactions are often considered to be challenging due to factors including the common use of different definitions for oxidation and reduction. The links between these definitions and their consistency with each other is often lost on students who get bogged down in the terminology. 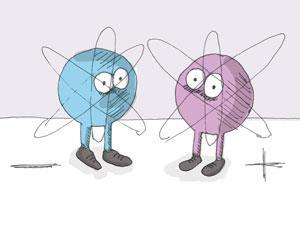 The article highlights some interesting misconceptions, including the fact that students often think that atoms of an element always have the same oxidation number as their ion (eg Mg always has an oxidation number of +2). Explaining the redox processes involved in the conversion of CO32-to CO2 was also suggested to be problematic due to the change in charge and the fact that oxygen is lost during the reaction.

During this study, 55 volunteers viewed two animations (without hearing the narrations) depicting the reaction of copper metal with silver nitrate, followed by an interview with the researchers. Extensive analysis of student responses, sheds light on their understanding of how the animation relates to the underlying theory. A number of misinterpretations are highlighted, illustrating the risks of using animations without clear explanations. Many students attributed the colour of copper sulfate solution to the presence of 'blue particles' (ie nitrogen atoms in nitrate ions), while many also misidentified water molecules (red and white clusters) as nitrate ions. Confusion over the numbers of particles present also led to misconceptions about the charges on ions and the stoichiometry of the reaction.

The authors acknowledge that the absence of accompanying narrations/explanations may be responsible for many of the misconceptions encountered, and this is cited as evidence for their assertion that high quality narrations are crucial to the effectiveness of such animations. Teachers should be mindful of this when using animations to supplement their teaching, ensuring that the particles represented are correctly assigned and that the chemical processes illustrated are well understood. Additionally, the authors indicate that their findings support Mayer's previous suggestion that extraneous material should be excluded from animations to avoid distracting students from the key principles being illustrated.