Clarifying the terminology used in textbooks and teaching

The concept of the 'amount of substance' underpins much of chemistry, yet remains challenging to many students and teachers alike. Successful application of the concept depends on the ability to move seamlessly between macroscopic, microscopic and symbolic levels of representation, which is often problematic for students. The use of unclear and confusing terminology also presents a barrier to many students embarking on chemistry studies. In a recent study, Pekdag and Azizoglu analysed the coverage of the 'amount of substance concept' in 15 different textbooks, uncovering a number of flaws along the way.

The introduction to the article includes some interesting historical anecdotes and points to the origin of the modern definition of the mole, which was established in 1971 as 'the amount of substance of a system which contains as many elementary entities as there are atoms in 0.012 kilogram of carbon 12; its symbol is "mol".' A key point, which has been stressed subsequently by IUPAC, is that the 'elementary entities' (eg atoms, molecules, ions) must be specified when the term 'mole' is used. This latter point is one which is often missed, even in textbooks. 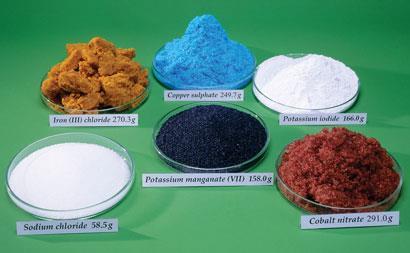 Each dish contains a mole of ionic compound

The researchers analysed 15 texts published in the US, France and Turkey. Ten of these were at university level, with the remainder being targeted at 10th or 11th grade. Once mistakes in the texts had been identified, they were classified based on the nature of the error. These mistakes make interesting reading, particularly as many of the erroneous expressions are frequently used in questioning and classroom discussion.

Some of the errors discussed may appear rather subtle, an example being 'How many moles are in 45.6 g NH3?', which was corrected to 'What is the amount of substance in 45.6 g of the compound NH3?'. While many students (and perhaps teachers) might ask 'why does it matter?', the discussion is thought provoking and sheds light on the ambiguous nature of our use of language when conversing about chemical matters. Some mistakes stand out as being clearly incorrect, for example 'The molar mass of the Na atom is 22.99 g' which was corrected to 'The molar mass of the element Na(s) is 22.99 g mol-1'. By combining macroscopic and microscopic concepts, this error may confuse students, or perhaps even lead to misconceptions.

This article provides teachers with interesting historical context regarding the mole and its definition, and will be of value to anyone wishing to reflect on their use of language in classroom discussions and in the phrasing of questions. The authors also provide three very useful teaching models which could be adapted for use in teaching.