There has been much recent interest in 'active learning', and how to adapt such approaches to large classes. Active learning is characterised by student participation in the learning process, often through group discussion, problem-based learning and Socratic dialogue. It contrasts with traditional approaches, where students are passive recipients of information. Obenland et al  describe a study that probed the relationship between participation in lectures and performance. 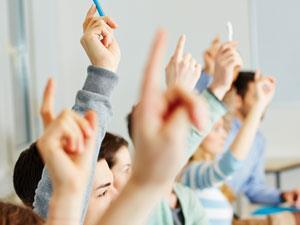 The study involved over 800 students on a General Chemistry course over a two year period. The active learning approach employed has been developed over several decades, and makes extensive use of Socratic questioning. Students are asked to complete reading assignments beforehand, which relate to approximately 40 Socratic questions asked during the lectures. Students raise a hand to answer a question, with the one selected to share their answer. Participation is incentivised by the award of a small amount of credit towards the course grade.

Students were categorised based on their level of participation in lectures. Those attempting to participate at least once per week were identified as 'vocal', with less frequent contributors classified as 'silent'. Pre- and post-tests compared the achievements of different students, with the former showing that there was no significant difference in prior knowledge between the different groups of students.

The post-test indicated that vocal students, with an average score gain of 6.80, significantly outperformed silent students, whose average score gain was 5.51. A number of the students were also interviewed, with their responses shedding light on the nature of the benefits of participation. One student commented sagely that 'I think he wants us to figure it out rather than him just telling us', while another noted that 'Always being involved in the lecture .feeling like you're following it as it goes, and the questions are kind of like checkpoints.' Students found that feedback on their answer was particularly valuable in helping them to clarify their ideas, with one stating that 'Even though I knew the answer, I probably wouldn't be able to explain it how I wanted coherently.'

Many students indicated that they were encouraged to start participating by the tiny amount of credit they received, but most reported that they could see genuine benefits to their learning. The fact that effective participation required engagement with reading assignments was seen to be a good thing, and undoubtedly contributed to the improvement demonstrated by vocal students. The authors acknowledge that the reasons for the performance differential are complex, but this study provides valuable evidence for those seeking new approaches to their teaching.