Studying the steps up to uni 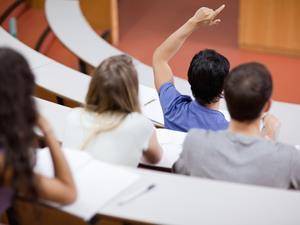 Many students find the transition from school to university challenging, not least because the approach to learning changes so radically. At school, classes are small and teachers provide extensive guidance, as well as encouraging students to construct explanations, critique ideas and make connections beyond the context of the immediate problem. Whereas at university, lecturers traditionally deliver monologues to large groups of generally passive students in the expectation that material will be learned outside of the lecture hall with little additional input. Thus, to help learners get the most out of their university education, we should seek to understand how they adapt to this change.

To this end, Sinapuelas and Stacey have investigated the various approaches used by university students to learn introductory chemistry concepts during self-directed study.

The researchers started by conducting surveys. But in these they found that responders tended to over-report their use of resources. This led the researchers to switch to interviews as a means of sampling the students’ study habits. The interviews involved 61 individuals who were each questioned at three points in the year, providing a range of data from which a ‘Learning Approaches Framework for Chemistry’ was formulated. The framework classifies learning approaches into four levels: gathering facts, learning procedures, confirming understanding and applying ideas. The last of these levels was added later in response to some students displaying advanced characteristics at the third sampling point. During interviews, students mentioned many activities and resources, which were grouped into four categories: metacognitive skills, reference materials, practice problems and interactions with others.

Detailed analysis of the interview transcripts allowed the researchers to effectively grade students on their study approaches, taking account not just of what they did but also how they did it. Level 1 students are characterised as asking ‘What is the answer?’ while level 2 students ask ‘How do you do this?’. Beyond this, level 3 students ask ‘Am I thinking about this correctly?’ and level 4 students ask ‘How does this apply to what I see in the world?’. Level 2 was the most common classification at each interview stage, but the proportion of students classified at higher levels increased each time. The researchers also examined the relationship between the level of the student and their exam mark. Students characterised into higher learning approach levels performed better than those below them in all cases showing that, by this measure at least, the ‘right’ approaches really do yield results.