The meaning behind mechanisms

What do students really understand from representations?

One thing that’s always bothered me about chemistry is the amount of information that’s hidden away in seemingly innocuous words or diagrams. For example, if I use the word ‘hydrogen’, do I mean a hydrogen atom or a molecule? Is it just one molecule or am I talking about a cylinder-full?

Chemistry is difficult because it is full of representations.

Imagine a student presented with a reaction scheme – something we use to represent a chemical reaction. If the student considers only the functional groups or reagents to understand how the reactants turn into the products, then they would be doing so using perceptual attributes only – a surface level interpretation of the information. But if the student considers the mechanism or formation of intermediates, they would be using relational attributes – a much deeper level of interpretation showing they can relate the representation to its meaning. 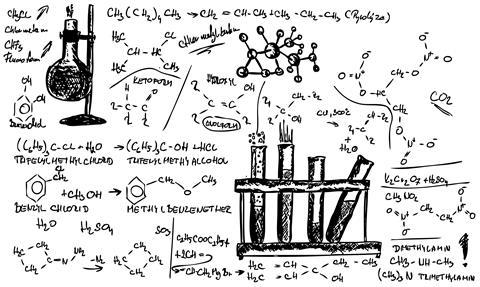 A recent study probed the perceptual and relational attributes that new chemistry undergraduate students use to categorise chemical reactions.

The researchers focused on a small subset of all possible chemical reactions – electrophilic addition to alkenes. These included reactions with dipolar, radical, cycloaddition and heterogeneous catalysis mechanisms. This restriction avoided cognitive overload for students while allowing enough area of study for meaningful observations.

They interviewed students to capture detailed information about their thoughts when presented with four different sets of reaction schemes.

The students’ interview responses were analysed based on their use of perceptual or relational attributes to explain their categorisation of each set of reaction schemes.

Given the complexities of a topic laden with hidden meaning, it’s not surprising that around three quarters of students’ categorisations were based solely on perceptual attributes. This suggests little chemical understanding was employed as they thought about the reactions presented to them.

Students only formed just over 15% of their categories using relational attributes. Reasoning included: the involvement of a carbocation intermediate; whether or not a reaction proceeds in a concerted fashion; or a molecule being involved in syn-addition.

The tendency to consider perceptual over relational attributes persists even when students were asked to use the mechanism as the basis for forming categories for the reactions.

It is not surprising that students focus on atomic level changes rather than underlying mechanisms – it significantly reduces their cognitive load. However, this focus on perceptual attributes is probably our fault. Textbooks and organic chemistry curricula are often organised by the chemistry of functional groups, elevating the importance of perceptual attributes at the outset.

While it might not be possible to change the overall structure of a curriculum, you can promote an understanding of the meaning behind reaction schemes by altering how content is presented. Organising content around mechanistic processes and reaction intermediates may help anchor cause and effect relationships and allow students to recall them in novel situations.

Students in this study used the Markovnikov (or anti-Markovnikov) rule as a purely perceptual attribute. This was often cited without any understanding of how the relative stability of intermediates directs the regiochemical outcome. If you teach this without initial reference to a named rule, and only through an exploration of the mechanism, students may understand the process more deeply.

Finally, as with most programmes of learning, carefully designed tasks can ensure the desired learning. In the context of this study, that means promoting students’ understanding of relational attributes rather than perceptual ones. For this, the authors’ research instruments, found in the paper, could be directly employed or adapted for use in a classroom.