Why does jelly wobble?

Jelly is one of those desserts guaranteed to make you smile. It is so pleasing to watch it jiggle on the plate and as our spoons glide through it. In addition to its aesthetic appeal, the science behind jelly is also fascinating. 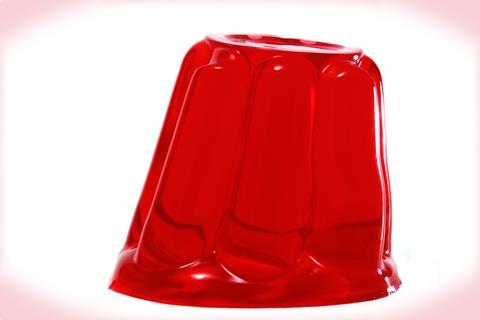 The chemistry between jelly and ice cream is unquestionable, but what is the science behind jelly’s jiggle?

Jelly is a type of colloid known as a hydrogel – a network of solid chains dispersed through water. The solid, polymer chains in jelly are called gelatin and are a mix of different amino acids. The polymer is created through the partial hydrolysis of collagen – the substance that keeps our skin firm and taut – and is usually obtained from animal hides and bones. Agar, a vegetarian-friendly alternative made from seaweed, is also available and often used in Asian cuisine.

Gelatin is an incredible material. It’s capable of absorbing up to 10 times its weight in water, is transparent, brittle and only dissolves in polar solvents such as water. Gelatin is completely safe to eat, and is tasteless, odourless and colourless. These properties mean it’s useful for any food that needs thickening (such as soups, dips and puddings), but also in cosmetics (eg shampoos) and capsules for medicines. It’s even used for photographic films, and for dummy bodies used by crime scene investigators when testing the impact of weapons.

Jelly mix can be bought in the supermarket as a powder or as concentrated cubes. When hot water is added to these, the hydrogen bonds between the gelatin polymer chains break, allowing them to unfurl and stretch out, so the jelly can be poured into the desired shape. During cooling, the polymer chains coil up and the hydrogen bonds between the chains reform to build a three-dimensional net. These chains can be so long that they span the entire jelly and create a thicket of amino acids that surround and trap the water molecules.

A downside of gelatin is that, being a protein, it can be digested by enzymes. This is why you should never put fresh pineapples or kiwi fruits in a jelly mix. They contain the enzymes bromelain and actinidain, respectively, which break down gelatin’s polymer chains into smaller pieces, preventing the water from being trapped and leaving the jelly a puddle of flavoured goo. Tinned fruits are fine, however. For example, pineapples are heated to kill any bacteria before they are canned, which denatures the bromelain enzymes and prevents them from doing their job.

Once you’ve got your jelly set, physics comes into play. A key ingredient to jelly’s wibbly-wobbliness is resonance. As most of jelly is just water, it picks up vibrations in the same way as a liquid. These sensations are amplified, so even a small tremor or jolt is enough to start a jelly wobbling. Thanks to the polymer net keeping things in place, the jelly shakes around on the plate as the kinetic energy passes through. This is an incredibly useful property, as it means similar materials can be used to dampen vibrations and protect structures and sensitive equipment from damage. For example, vibration dampening foundations are used to protect skyscrapers in the event of an earthquake.

Elasticity is another important factor behind jelly’s jiggly behaviour. Gelatin chains are flimsy and deform on impact. However, the bonds between the chains prevent them from stretching out completely, allowing the chains to return to their original, relaxed state, and the jelly to return to its former shape. Elasticity is an incredibly useful property, and is also the reason rubber bands spring back into shape after being stretched. Vulcanised rubber is made of long chains of cis-1,4-polyisoprene linked together with sulfur bridges and will spontaneously return to its original shape after being stretched (within reason).

So why does jelly wobble? It’s because kinetic energy is transferred to it through vibrations, which is amplified throughout the jelly’s hydrogel structure causing the polymer chains inside to deform. Once the source of energy is removed, the elastic polymer chains return to their resting state, and the jelly is still once more – and ready to eat.