Behind the scenes at the Victorian pharmacy

The recent BBC television series about a Victorian pharmacy features the Bates and Hunt Chemist's shop at Blists Hill, a recreated Victorian town at Ironbridge Gorge. The shop was built in 1984, but is modelled on a pharmacy that stood in nearby Wellington. The contents, however, came mainly from a pharmacy in Bournemouth. John Challen, the museum's curator of technology, approached me regarding the risks posed by the collection. The museum's trustees wondered whether the contents of the iconic bottles needed to be removed to ensure the safety of staff and visitors. John wanted to know whether this was a reasonable reaction. So began a fascinating 18-month collaboration between university staff, museum staff and undergraduates. 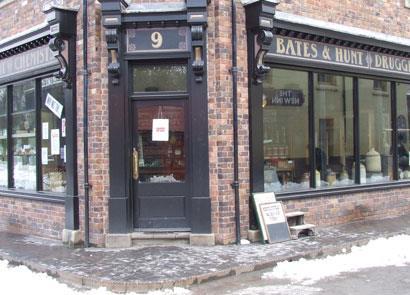 As well as the Bournemouth collection, the shop contains an assortment of bottles and contents from various pharmacies in the West Midlands. It had been curated for some time by a local pharmacist after his retirement. One member of museum staff recalled adding food dye and water to some bottles to improve their appearance, but no records had ever been kept. A sixth form chemistry student had catalogued the bottles in the order they appeared on the shelves. Other than that we had no other information relating to the collection, but the fascination of the challenge overrode our impulse to declare ourselves too busy to help. So many bottles, so little available time... 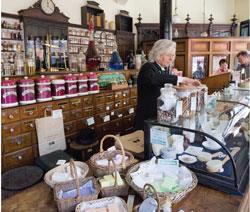 A chemistry colleague, Katherine Haxton, and I initially investigated the site. Two encouraging features prevented us from conceding defeat before we began. The first was that the cataloguing had been done very accurately by the sixth former, and the second was that some of the jars seemed to present no barrier to identification. One glance at a vivid green-blue powder had us chorusing 'copper acetate'. The crystal shapes of salicylic acid were almost as characteristic. The oregano oil still smelled slightly of the herb.

Preliminary analysis revealed that there were three main categories of contents: white powders, which were probably salts of some sort; botanical material suspended in solution; and coloured solutions, which probably corresponded to the food dyes. A fourth, very reassuring, group - not least because so many of them were located in the lockable 'poisons' cupboard, were the empty jars.

Back at the university, between teaching and supervisory duties, I began to research the possible contents of the jars based on the labels. My O-level Latin and my time as an undergraduate at the London School of Pharmacy were invaluable here, and I was lucky to be able to call upon another Keele colleague, Mark Brennan, senior lecturer in pharmacy law ethics and practice, who helped with the three that beat me entirely. One such was the mis-spelling of 'hydrarg' as 'hydrarc'. Happily, Mark was able to alert us, before we handled it, as to the toxic nature of the mercury compound that had originally been housed in the jar.

I then proceeded to devise a series of simple tests for the inorganic compounds and, as I drew up a list of reagents to take down to the site, I was struck by how I would be using analytical techniques that would have been familiar to the Victorian pharmacist, including litmus paper, silver nitrate to test for halides, barium chloride to test for sulfates. We were also going to undertake flame testing, beloved of nineteenth century chemists and whose line spectra had provided such important evidence about the differences between materials. Our reagents were transported in small plastic dropper bottles, rather than beautiful stoppered laboratory bottles, and Bunsen burners would be replaced with portable burners using small butane canisters, but the tests relied on the same empirical observations as familiar 150 years ago.

I was keen to make the project open to as many people were interested, so I decided to ask participants to run the tests on reference standards while I tested the jars' contents in parallel; the results could then be compared. But I had to be vigilant about safety. I risk-assessed all putative substances, assuming that any substitutions no more dangerous, and probably less dangerous, than the original contents.

A nearby school brought along a group of low ability year 10 students (14-15 year olds), who put my parallel analysis model to the test. The youngsters were fascinated and extremely diligent in running and recording the tests. I then ran a further day of parallel testing at the museum with the general public. After these two sessions, we had analysed around a quarter of the jars. Most of the inorganic salts appeared to match their labels, but a few didn't. The quicklime did not give the anticipated orange-red flame test. Instead we were left with a brown sticky mass and a strong smell of toffee - the original calcium oxide had been replaced with icing sugar.

Mercury, like many transition metals, has several common forms. In the ointment in the pharmacy it was in the +2 form (it also forms a +1 ion). It is also bonded to a ligand, ammonia. This can be identified by adding acid to release the ammonia and then adding iodide. An orange-red solid iis produced when mercury(ii) iodide forms:

Test for phenol with ferric chloride

The oxygen in phenol can donate its lone pair of electrons to iron(III) and act as a ligand. This shift in energy levels in the iron gives a purple colour.

As well as being cheap and accessible, the tests were quick and, if well selected, surprisingly informative. The mercuric compound was confirmed as authentic by the bright red precipitate of mercury(ii) iodide which formed slowly when potassium iodide was added. We grew increasingly creative and strategic in our hunt for suitable protocols to identify our mystery substances. 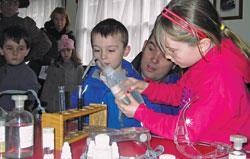 The organic substances, of which the majority were botanic extracts, had to be brought back to the university labs to be analysed using infrared and ultraviolet-visible spectroscopy equipment. We anticipated that we would need to continue to combine wet tests with instrumental techniques. We scheduled a week and invited anyone who was interested to attend. The project attracted chemistry undergraduates, along with groups of sixth formers from five schools. This provided a work force sufficient to complete the task.

However, by their nature, extracts can contain cocktails of complicated substances. This made it a much more daunting task than the inorganic substances had been. In some cases, such as rose water, we were able to borrow (in this case from Katherine's kitchen cupboard), a reference sample. A colourless liquid, which gave a whole set of negative results, boiled at 102°C - a familiar result to anyone who has seen year 7 school pupils boiling tap water. In other cases, more research was required to identify a suitable test or combination of tests. 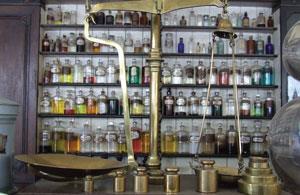 A huge and diverse range of materials to test...

Powders with all the physical properties of talcum powder proved frustratingly resistant to all standard wet tests, but gave enough of an IR peak where silicate should absorb to convince us. The most difficult substances were 'dragon's blood' and a brown powder in an unlabelled jar, which smelled of carob. These finally gave a positive, and very beautiful purple, result for (poly)phenols with ferric chloride solution.

Three substances defeated our combined problem-solving capacity, but they had the characteristic colour of herbal extracts and the liquid burned with a clear blue flame. An iodoform (triiodomethane) test confirmed that the solvent was ethanol, so we felt it reasonable that the original extract was still in the bottle. After all, it would make no sense to dispose of one ethanolic solution on grounds of safety and replace it with another. In just one case, we had to resort to nuclear magnetic resonance (NMR) spectroscopy, which used up all the deuterated water our limited budget would run to. 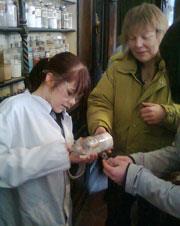 While recognising the limitation of drawing conclusions from the several part-collections that have been merged, several points of interest emerge from the analysis. First and foremost is the large proportion of unlabelled and empty bottles in the display. Approximately half of the contents of the labelled bottles have been disposed of by successive curators, with the inorganics being treated slightly more leniently and also constituting a useful source of inert 'bottle-fillers'. Nevertheless, the predominance of organic remedies, almost all plant extracts, in the original containers means that they still outnumber any other category, even after significant reduction by disposal. Mineral remedies were nearly all petrochemical in nature and may well have been disposed of due to their flammability in some cases and, more recently, fears about the carcinogenicity of some. Remedies of animal origin constituted only a tiny fraction of the Victorian pharmacist's stock, presumably because of their putrescible nature; those that were used were chemically robust and have survived un-degraded.

Substitution seems to have been guided by principles of low toxicity, availability and low cost. Food dyes in water are the most common substitute, but sugar, salt and talcum powder were all found in several jars. The Victorian pharmacy project has provided an interesting analytical challenge and one which reminds us, once again, of the wealth of analytical techniques that Victorian chemists developed, and which we can still use routinely today.

Studying for a degree in chemistry, we are taught about analysis, combining techniques such as proton and carbon NMR, UV-vis and infrared spectroscopy and chromatography. Analysis at the atomic level has become routine. Compared with the presumptive and confirmatory tests carried out at Blists Hill, the 21st century techniques seem almost excessive. As undergraduates, we learn that more sophisticated analysis techniques give more exact results. However, after completing this research project, I have become more aware of the power of simplicity in the first instance. Using simple acid-base tests, recalling transition metal chemistry, flame tests and even just looking at the sample crystals is all it took to identify many of the pharmacy's compounds. Perhaps we should use these more before jumping to the expensive instruments.

We were set the task of analysing bottles of chemicals from Blists Hill Victorian pharmacy. We researched what each chemical should have been, from the label, and carried out tests accordingly. If the tests were unsuccessful, we compared samples' IR spectra to library data. From this we found that most were simply water containing food colouring, and therefore posed no threat at Blists Hill. However, a small number of samples remained unknown.

One sample, labelled 'embrocation', was thought to contain capsaicin, an alkaloid found in chilli seeds. A quick trip to YouTube showed me a relatively simple test for alkaloids, using Dragendorff reagent. I had to make the reagent myself using indigestion tablets (for the bismuth) and other home ingredients. This work paid off with a positive result, confirming what was in the sample. Apart from potentially being a mild irritant, the ointment was perfectly safe to be at Blists Hill.

The nitrogen atoms in alkaloid molecules are bonded to adjacent carbon atoms: they react very readily with acids. The protonated nitrogen then reacts with negative ions, such as iodide. The two very heavy ions, iodide and bismuth, gives a large complex that doesn't dissolve and has a characteristic orange colour.

Jane Essex is a lecturer in science education at Keele University, UK