How a warehouse of ammonium nitrate destroyed a capital city 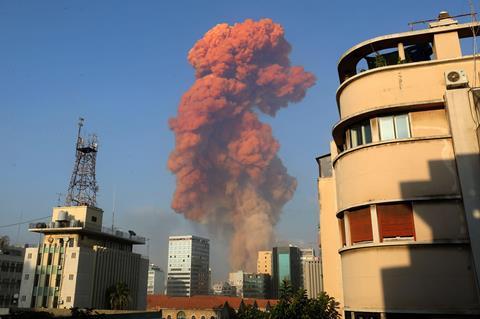 A large explosion rocked the Lebanese capital Beirut on 4 August 2020. The red and brown colour of the smoke indicated the presence of ammonium nitrate

On the evening of 4 August 2020, a fire at a hangar in the port of Beirut saw a team of firefighters dispatched to the scene. This seemingly routine call-out spiralled into a chain of events that led to a gigantic explosion, causing devastation for miles around.

Much of what happened was recorded on smartphones; locals posted the smoke plume from the initial fire on social media. Shortly after 6pm, the smoke was joined by a bright burst followed by a series of smaller flashes. An explosion followed, throwing a much larger, darker plume of smoke straight upwards. The second – much bigger – explosion came shortly after.

Use this article as a context within which to explore the structural formula of compounds and the enthalpy of the bonds within those compounds. Students will already be familiar with the mechanisms of a decomposition reaction but may not have made the connection between their classroom learning and the news story that unfolded in front of them. In the worksheet below, students will apply mathematical skills to problems to make sense of the observable phenomena of explosions which will encourage them to consider the chemistry around them every day.

Cameras first captured a brilliant flash, then a massive brown and orange fireball, then a humongous white mushroom cloud and, finally, a misty white ring travelling outwards from the centre of the explosion. The accompanying shockwave yanked camera operators off their feet, ripped apart buildings, crushed vehicles and even capsized a docked cruise ship.

Final numbers haven’t been confirmed, but more than 190 people were killed. A further 6500 were injured, hundreds of thousands made homeless and billions of pounds of damage caused.

The hangar housed 2750 tonnes of ammonium nitrate, a bulk commodity chemical widely used as both an agricultural fertiliser and an ingredient in explosives. It’s usually sold as pellets, or prills, a few millimetres across that are safe at room temperature.

‘Pure solid ammonium nitrate requires a large mass and very substantial shock stimulus to detonate,’ explains Martin Braithwaite, an explosives expert at the University of Cambridge. But when melted, by a nearby fire for example, it becomes much more shock sensitive. Molten ammonium nitrate rapidly decomposes to form gas. This gas forms bubbles within the liquid, and it’s these bubbles that make it dramatically more susceptible to shock.

‘What may have happened in Beirut is that the fire caused some of the ammonium nitrate to melt. The molten ammonium nitrate then started to decompose to form gas voids leaving a highly reactive and shock sensitive media – made more so by any impurities,’ says Martin.

Challenge students to explain why a ‘runaway’ explosive reaction occurs using chemistry concepts of structure, bonding and enthalpy. Download the worksheet as MS Word or pdf from the Education in Chemistry website: rsc.li/2HkVUSS

Fireworks and other energetic materials were also reportedly stored in the same hangar. These are the suspected cause of the initial bright burst and flashes, and the shock of them exploding may have provided the trigger needed for the molten ammonium nitrate to explode: the first explosion. ‘This may have provided the bigger shock needed to trigger the second, much larger explosion of the solid ammonium nitrate,’ Martin adds.

The distinct red and brown colour of the fireball accompanying the second explosion enabled Twitter observers – including Andrea Sella, an inorganic chemist at University College London – to identify that ammonium nitrate was present. It’s the signature colouring of NO2 gas, produced during ammonium nitrate decomposition. The mushroom cloud seen next is quite common in high energy explosions, explains Andrea. ‘It’s convection made visible.’

The misty white ring seen was trailing directly behind an invisible shockwave. The shockwave compresses and heats the air as it pushes through. ‘The adiabatic expansion behind leads to rapid cooling of the air and formation of transient water droplets that evaporate away,’ says Andrea. ‘It’s the same process that you see when you open a bottle of soft drink.’

Multiple opportunities were missed to prevent this incident. Firstly, the ammonium nitrate should never have been at the port. The ship it was travelling on was detained at the port by Lebanese authorities way back in November 2013. It isn’t clear why. The cargo was offloaded to the hangar some months later and general inertia seems to have left it sitting there until that fateful August evening.

Even then, had the ammonium nitrate been stored correctly, this disaster would never have happened. ‘The prills can be stored safely at any scale,’ says Martin. They must be stored away from combustible materials, energetic materials, high velocity projectiles and be protected from contamination.

Similar explosions have occurred with alarming regularity over the past 100 years. In April 2013, 240 tonnes of ammonium nitrate exploded at a fertiliser storage depot in Texas, US, killing 15 people and injuring around 200. In August 2015, warehouses containing chemicals (including 800 tonnes of ammonium nitrate) in Tianjin, China, exploded, killing at least 160 people and injuring more than 700.

The mismanagement of ‘ammonium nitrate will probably continue to cause accidents because although we have the regulations and the knowledge to prevent them, over time we get complacent and forget what the dangers are,’ concludes Andrea.

With thanks to Chris Stennett, Cranfield University, and Geoff Maitland, Imperial College London, for their input

Article by Nina Notman, a freelance journalist specialising in chemistry. Resources by Nora Nora Richardson is a curriculum lead, an experienced examiner and a chemistry teacher in Wales