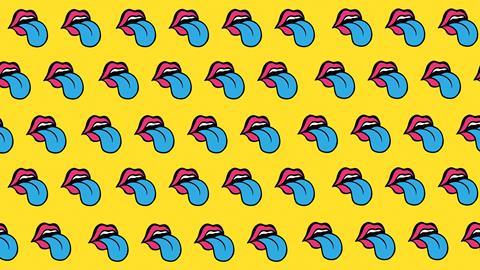 How chemists identify the molecules that give foods their flavour and create new products like vegan-friendly, ‘bacon-flavoured’ crisps

Next time you eat a jelly bean, try pinching your nose. Pop it in your mouth, chew and swallow. I bet all you will taste is its sweetness. With the next one, try releasing your nose mid-chew. At this point you will suddenly get the full flavour experience, be that of lemon, apple pie or stinky socks.

‘Flavour is really dependent on aroma,’ explains Charlotte Catignani, research and development manager at Treatt, a UK flavour and fragrance ingredients manufacturer. Researchers believe just 20% of how we perceive a food or drink’s flavour is down to the receptors on our tongue, the remaining 80% is thanks to those in our nose. This is why foods often appear flavourless to us when we are bunged up with cold. 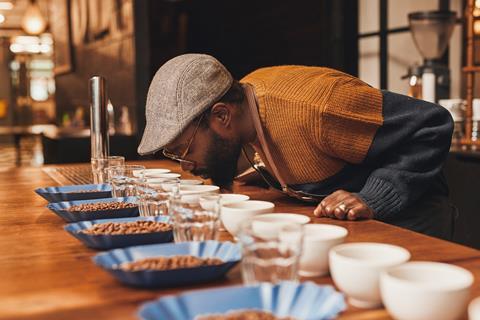 Our tongues may host thousands of receptors, or taste buds, but they are only able to pick out five main tastes. Sweet, sour, salty, bitter and umami. By contrast, there are around 400 different types of scent receptors at the back of our nasal cavities. These are thought capable of assembling at least one trillion different smells.

This article highlights how chemists identify the molecules that give foods their distinctive flavours and how they can use this information to create new flavours, for example a vegan ‘bacon flavour’. The article could be used to make a link to key chemistry concepts such as the particle model, mixtures, volatility and chromatography. It also links to chemistry careers by highlighting the work of UK-based flavouring manufacturers.

‘When you bring a food or drink up to your mouth, the first thing you do is smell it,’ says Charlotte. This is a protective action, called orthonasal olfaction, which sniffs aroma molecules in through our nostrils and up to the scent receptors on the olfactory epithelium. Its purpose is to stop us ingesting things that are harmful. Once the food or drink is in our mouths, flavour molecules enter the nose through the back of our throat instead. This is called retronasal olfaction.

Flavour molecules are released from foods by chewing and by saliva. Then, as the soft palate opens and closes during swallowing, the molecules in the back of the throat are wafted towards the scent receptors in the nasal cavity. ‘The aroma molecules interact with the olfactory bulb sending signals to the brain,’ explains Ian Butler, innovations director at the UK-based flavouring manufacturer Synergy Flavours. The brain will interpret the multitude of signals it receives from each food or drink (via both the tongue and nose receptors) to help determine its flavour.

Most strawberry-flavoured processed foods and drinks don’t actually contain any strawberries or strawberry juice. The same is true for many other flavours. This is for a myriad of reasons including price, stability and colour concerns. Instead, flavour chemists use a combination of flavour molecules to recreate the desired flavour.

For a food manufacturer wanting to mimic a flavour, say of strawberries in strawberry yoghurt, the first step is to identify the important flavour molecules. Gas chromatography–mass spectrometry (GC–MS) is the tool of choice here. The flavour molecules are first collected – possible approaches include putting the foodstuff into an organic solvent (into which the flavour molecules will dissolve) or by collecting volatile molecules that are being released by the food or drink into the air around it.

‘We have an instrument called a dynamic headspace gas chromatograph, which takes a sample of the air from just above a drink. The air is then pumped through a glass tube packed with an absorbent material, and that traps all the aroma molecules,’ explains Charlotte. ‘This is then heated up gently to release the aroma molecules, which then get injected into a gas chromatograph which is coupled with a mass spectrometer.’

The gas chromatograph separates out the volatile flavour molecules in the mixture and the mass spectrometer determines their weight. ‘Upon using a library, we can identify all the different components,’ says Charlotte.

Make links between maths and chemistry with this worksheet on percentages of limonene oil in different citrus fruit. It uses the bar model to help students visualise the relationship between the maths and the chemistry.

But there is a problem. ‘The mass spectrometer will indicate that there are in excess of 100 different volatiles in strawberries,’ explains Ian. This is a logistically impossible number to add to a food or drink. Instead, flavour chemists will look to identify the most important flavour molecules.

‘The next stage is to run that extract through the GC–MS again but this time we would split the sample, so one part goes to the mass spectrometer and the other part goes to an olfactory cone,’ says Ian. A trained assessor sits at the cone and continually sniffs the extract as it comes off the GC column, recording each time they detect an odour.

‘The detected odour zones are then overlaid with the outputs from the GC–MS, and from that we can start to identify which compounds are odorous and could therefore potentially contribute to the flavour profile of strawberry,’ says Ian.

The identified compounds are then quantified and their odour thresholds considered. ‘This is the lowest concentration at which you can perceive an aroma of an individual molecule,’ Ian explains. ‘We would take this information to help us develop that strawberry flavour.’

Flavour molecules only make up around 0.1% of a processed food or drink’s components. ‘That’s why if you look on the ingredient declaration for a food product, you’ll see that flavouring appears down at the bottom with colour and preservatives,’ explains Steve Pearce, chief executive at Omega Ingredients, a UK manufacturer of natural flavour and fragrance ingredients.

Much like an artist mixes colours on a palette, flavour chemists will then mix these chemicals to design and build up a desired flavour profile.

There are lots of additional considerations here: such as availability, price, legislation, and whether the flavour molecules need to be natural (coming from food sources) or artificial (from non-food sources). In addition, the molecules need to have the right solubility, be able to withstand food manufacturing processes and have the desired shelf-life.

In an ideal world, a flavour manufacturer would make a universal, for example, raspberry flavour that could then be added in any type of food and drink, ranging from ice cream to a cereal bar to a flavoured cola. But for the reasons above this isn’t possible, and many foods and drinks therefore contain bespoke flavour molecule combinations.

The sophistication of the flavour profile needed is also important. Do the food or drink manufacturers want to offer a signature flavour experience, and what does their consumer want to taste and smell when they ingest it? ‘If it’s a children’s raspberry yoghurt they may not be too concerned about any really sophisticated flavour characteristics and aroma,’ explains Steve. ‘But for a more expensive product for adults, the customer may say: “we need a really good raspberry aroma. It’s got to not be too jammy and cooked and must be more fresh and lively.”’

Once they have all the above information, the flavour chemists will start the flavour creation process. For a raspberry yoghurt, for example, ethyl butyrate and ethyl acetate will probably be included to give the underlying fruity note. ‘Then we start to use some of the character molecules, the raspberry ketones, to shape that into much more of a raspberry flavour,’ says Steve. ‘Violet notes are also really important character molecules for raspberry.’ 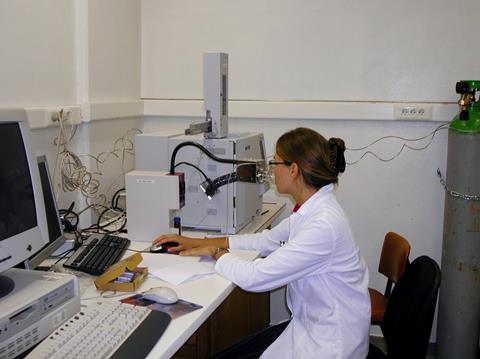 The flavour chemists use creative skills alongside their chemical knowledge in this process. ‘It’s understanding how the molecules might work together and how adding a little touch of rose or something else will complement a flavour and make it a bit different,’ says Steve. A rose note can be achieved with molecules such as phenylethyl alcohol or a tiny touch of rose oil. For additional freshness, cis-3-hexenol or trans-2-hexenol might be added, for example. ‘It’s about getting the balance right,’ he adds, ’and we would do this all by aroma, we do not taste anything at this point.’

Next the flavour molecules are dissolved in a tiny amount of a flavour- and scent-less solvent such as propylene glycol and then tested in the intended food or drink. ‘The final stage is putting it into the yoghurt base with the customer, trying it with them and having them say “wow this is amazing” or “you know what, I’d like it to be a bit greener or a bit more brambly,”’ explains Steve.

Sugar reduction is a huge current trend in the food industry, driven by consumer choice and government initiatives such as the sugar tax. Flavour molecules can help with this. ‘A smell that is associated with a sweet taste will cause a physiological response where your body picks it up as being sweet,’ explains Charlotte.

‘If I gave you two cups of sugar water and in one of those cups I put  enough vanilla that you could just smell it, then 95% of people will choose the cup with the vanilla as tasting sweeter, even though the sugar level’s exactly the same in the two cups,’ she says. ‘It’s only a very small effect, but it can be quite useful for reformulating beverages.’

Flavour molecules can also be used to support fat reduction efforts. ‘There’s a drive to replace butter and other fats in baked goods,’ explains Ian. Flavour chemists at Synergy Flavours are studying the flavour molecules in butter and how they change during the cooking process. ‘We then look to replicate that in finished baked goods that contain significantly reduced levels of butter,’ says Ian.

‘The rise of veganism and use of plant proteins is also really interesting for flavour companies,’ says Charlotte. Some consumers want the flavour of meat, without actually eating meat, for health, animal welfare or environmental reasons. Many meat-flavoured crisps, for example, have long been suitable for vegans. But the number of meat-flavoured, vegan products is currently skyrocketing. This is has only been possible because of the ingenuity of flavour chemists.

A practical extracting limonene from oranges would bring this topic to life and create a pleasant aroma. Download instructions for a practical suitable for KS5 or demonstration for KS4.

To help with the worksheet, see the MathsPad website’s useful visuals for teaching percentages.