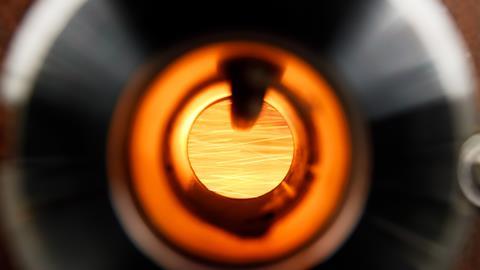 Anyone who has drawn shapes in the night sky using light from a sparkler has witnessed burning metal, yet few would automatically think of metals as an energy source. That’s unless you count rocket scientists, who have long used metals in propellants. Metals such as iron offer a promising way to store renewable energy and to power long-distance transport and heavy industry.

In 2015, Jeff Bergthorson and colleagues from McGill University in Canada published a landmark paper laying out the concept of burning tiny metal particles, similar in size to flour or icing sugar, to generate power. When metal powders are burned they react with air to form stable, non-toxic solid oxide products, releasing a large amount of thermal energy but no carbon dioxide. Using hydrogen to reduce the metal oxides back to pure metal closes the loop.

Bring out this article when students ask that age-old question: ‘but why are we learning this?’ Students will be able to see how a simple reaction familiar to most – the oxidation of iron to form iron oxide – has the potential to help the UK achieve its target of net-zero carbon emissions by 2050.

Metal fuel is similar to the hydrogen economy, says Jeff. ‘With the hydrogen economy you take clean electricity and water and you split it into hydrogen and oxygen and then you can transport and store the hydrogen before putting it in a fuel cell or burning it.’ But hydrogen requires large, expensive storage tanks. ‘It’s not acceptable on a large scale,’ says Yuriy Shoshyn from Eindhoven Technical University (TU/e) in Netherlands.

Metals are easy to store and have a high energy density – the amount of energy that can be produced per cubic metre of fuel. The most promising metal fuel is iron, which is both plentiful and safe to store and transport. Burning iron powder produces iron oxide or rust (Fe2O3). The rust can then be reduced to pure iron using ‘green’ hydrogen.

In this activity students are required to apply their understanding of redox to identify which metal is oxidised and which is reduced in a series of displacement reactions.

‘The idea is basically that you can use the same fuel, charging it up where you have clean energy and then using it where you need that energy,’ explains Jeff. For example, Canada could produce vast amounts of renewable energy from solar and wind farms, which could be used to make and recycle iron fuel. ‘We could ship the fuel to England where you could use it to make clean power for the UK and then ship the iron oxide back to us to recycle. It’s like a battery. It’s just a different option for storing and using energy,’ he says. ‘Metals are a great way to store energy for a long time and to transport it over long distances. That’s the niche.’

Wind turbines and solar panels are perfectly suited to providing energy for national electricity grids. However, replacing fossil fuels, such as diesel, in all forms of transport is not an easy task. Battery-powered vehicles have a huge role to play but batteries are not suited to heavy-duty transportation such as large-scale shipping. Batteries discharge over time and can’t be used for long-term storage.

Another big challenge is how to trade renewable energy, replacing barrels of oil and gas pipelines. ‘Are we going to have electrical wires transmitting energy around the globe or are we going to use these types of chemical fuels?’ asks Jeff. ‘We argue that if you want to move energy from Canada to Europe, for instance, then it makes much more sense to store it in something like iron or aluminium, which are solid and safe.’ 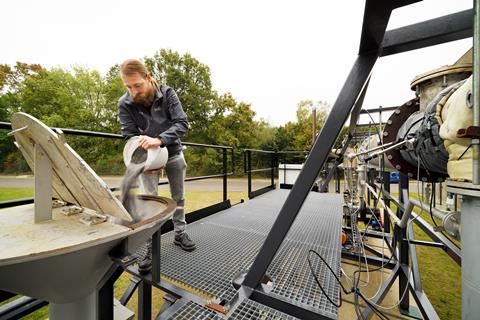 Initially working with Jeff’s team, a group from TU/e led by Philip de Goey has taken on the iron challenge. In 2017, the university launched a student project called SOLID to work on iron fuel technology. In 2018, SOLID students tested a 20 kilowatt laboratory iron fuel burner as a proof of concept. SOLID now has 30 students, some of whom are focusing on the possibility of using iron to fuel ships.

The TU/e team is part of a Dutch ‘metal power’ consortium called Metalot, which brings together academics, industry and government agencies. In October 2020, Metalot tested a 100 kilowatt iron combustion system at the Royal Swinkels Family Brewers, producing steam for the brewing process.

The burner was a success but has since been moved back to the Metalot lab for further research. ‘We want to learn from that before we design a more powerful one,’ says Yuriy. Metalot is currently working on a one megawatt system that will be ready for testing in the next few years. It hopes to see some coal-fired power plants transformed into sustainable iron fuel plants by 2030.

There are still technical challenges to overcome. One problem is that when iron burns it produces some nanoparticles, which are hard to collect and may be harmful if released into the atmosphere. Even a small amount of nanoparticles makes the burner technology inefficient because a fraction of iron is lost with each cycle.

Aluminium is another contender for metal fuel, although it burns at higher temperatures. Another possibility is to react metals such as aluminium with water to release heat and produce hydrogen gas, which can be burned or used in a fuel cell. Again, the metal forms an oxide, which can be recycled. Jeff’s group is setting up a consortium to develop a prototype metal–water reactor.

Even metals such as lithium and sodium have a role to play, with hydrogen-releasing reactions that occur when they are dropped into water. The metals are dangerous to handle and probably not suited to long-distance transport or storage but could have industrial applications in closed loop cycles, says Jeff.

Ultimately, climate policies and falling costs of renewable energy will drive all of the metal technologies. ‘There has to be a green premium paid to make this transition work,’ he concludes.