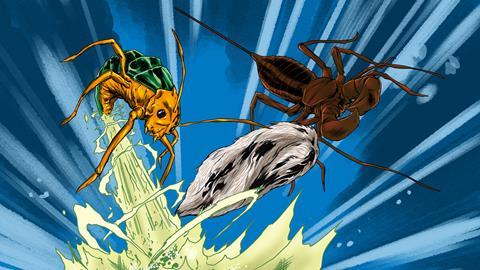 What do a puss caterpillar, a bombardier beetle and a vinegaroon have in common? 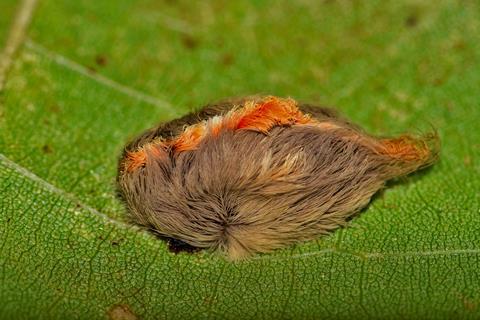 Cute and cuddly? A furry, but definitely not friendly, puss caterpillar

Andrew Walker is no stranger to carrying insect venom in his flight hand luggage. His next mission will be to transport venom harvested from asp caterpillars in Florida back to the University of Queensland (UQ) in Australia for analysis. Also known as puss caterpillars, they look as fluffy as kittens but have venom-laden spines that deliver a sting more painful than a bee’s.

Andrew is part of a team at UQ’s Institute for Molecular Bioscience (IMB) specialising in ‘bugs and drugs’. Researchers have only characterised a small percentage of venoms from arachnids and insects, but they hold great hope for new medicines. The team is on the lookout for venom from spiders, centipedes and scorpions that can inhibit or activate ion channels in human tissues, with a view to finding new medicines. Ion channels allow ions to pass from one side of a cell membrane to the other. Overactive or mutated ion channels can cause nervous system disorders such as epilepsy and strokes.

Venoms are complex mixtures of bioactive compounds, mainly peptides and proteins. Active at very low concentrations, many venoms target the neuromuscular system, while others have anticoagulant and anaesthetic activities and lower blood pressure. ‘There are many wacky and wonderful groups about which we know almost nothing, like venomous caterpillars and assassin bugs. We are interested in a lot of these venoms because they contain unique molecules that have evolved to do a job for the insects,’ says Andrew.

In July 2022, UQ licensed the team’s venom-based drug candidate for treating heart attacks to Infensa Bioscience. The drug candidate contains a substance from funnel web spider venom, which blocks the signals that cause heart cells to die and could reduce damage following a heart attack. 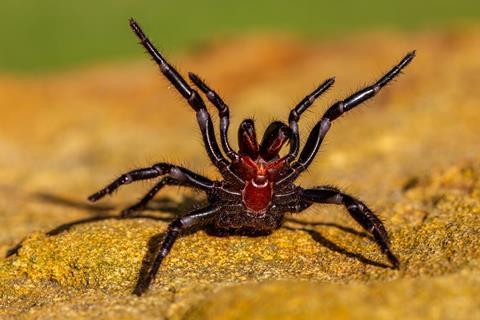 ‘Though she be but little she is fierce’: a Sydney funnel-web spider bears its fangs here, but its venom saves lives elsewhere

The compound could be used for different purposes. For example, it could limit levels of oxidative stress and tissue damage that occur during heart transplants. It could also have a ‘profoundly protective effect’ when administered to someone after they have had a stroke, says Glenn King, IMB group leader and chief scientific officer at Infensa. By the end of next year, Infensa hopes to begin Phase 1 clinical trials using the substance to treat a severe form of heart attack via a simple intravenous injection.

Treating stroke patients is far more difficult because drugs need to traverse the blood-brain barrier. However, the team has designed a set of second-generation molecules, which are far smaller and have a greater chance of getting into the brain. ‘They look like miniaturised versions of the active portion of the venom, which is pretty cool,’ says Glenn. The UQ team is also excited about using the funnel web molecule to protect hearts during transplant procedures. The idea is to add the peptide to the buffer that a donor heart is preserved in so that it can be flushed before reaching the recipient.

The team has already successfully tested the substance on pig hearts, which are similar to human hearts. ‘We are about to gear up to do a full pig transplant,’ says Glenn. ‘This is a super exciting time to be in this field,’ he adds, largely thanks to extremely sensitive analytical tools that can analyse tiny samples.

For many years, researchers focused mainly on snake venom. Unlike snakes, insects and arachnids such as scorpions produce minute volumes of venom. ‘We couldn’t have studied these things and learned about their composition – certainly couldn’t have studied the function of individual components – 10 or 15 years ago. We just didn’t have the tools to do it,’ Glenn explains.

Sensitive tools, such as x-ray imaging and mass spectrometry, have given recent insights into the wonders of bombardier beetles from both a chemical and an engineering perspective. When a bombardier beetle is under threat it produces a chemical explosion in its abdomen before expelling a jet of hot, noxious liquid, accompanied by a loud popping sound. The beetles can spray accurately in any direction up to distances of 20 centimetres.

With perfect timing, the beetles release hydroquinone and hydrogen peroxide from two reservoirs into a reaction chamber. There, the substances mix with catalase and peroxidase catalysts to create a foul-smelling, defensive spray containing two major quinones: 1,4-benzoquinone and 2-methyl-1,4-benzoquinone (p-toluquinone). Because the chemical reaction is strongly exothermic, the spray is close to boiling point when the beetles expel it.

The bombardier beetle’s defensive system was the ‘most fascinating’ of all. ‘Because it is such a complicated system, many people believe it is a perfect design’

In 2015, a team of US engineers led by Christine Ortiz at the Massachusetts Institute of Technology (MIT) used synchrotron x-ray imaging to observe the explosions inside living beetles. They found the spray is released in pulses controlled by a flexible membrane and a valve at the junction between the reservoir and reaction chambers. A pressure increase from the chemical reaction expands the membrane, closing the valve. After the beetle has ejected the first pulse of liquid the membrane relaxes allowing the starter chemicals into the reaction chamber for the next rapid burst.

Engineers have been inspired to copy the technology to patent a new kind of fire extinguisher, with a pressurised heating chamber. Another group has developed a bombardier-based diesel fuel injection system to improve burning efficiency in vehicles.

Draw energy level diagrams for exothermic reactions and explain the effect of catalysis on reaction profiles using the context of the explosive defence mechanism in bombardier beetles.

Chemist Athula Attygalle from Stevens Institute of Technology in New Jersey has a long history of studying bombardier beetles, sparked by his time at Cornell University in the 1990s, when he met Thomas Eisner, a chemical ecology pioneer specialising in arthropods’ chemical defence systems. Thomas would go out to collect insects and harvest their ‘defensive secretions’, while Athula would use mass spectrometry to analyse the samples. 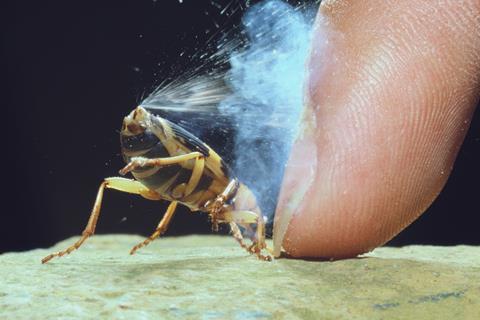 A marvel of a minibeast, the bombardier beetle ejects a boiling, noxious chemical spray with high precision

The bombardier beetle’s defensive system was the ‘most fascinating’ of all. ‘Because it is such a complicated system, many people believe it is a perfect design,’ says Athula. He now leads a team that has worked with entomologists to understand the chemistry leading to the explosive reactions inside the beetles.

In 2020, the researchers revealed a new synthesis route that the beetles use to make their chemical spray. It had always been thought that the benzoquinones came from just one precursor chemical, 1,4-hydroquinone, but they identified another precursor called m-cresol. They made their discovery by tying off the beetles’ reservoir chambers to prevent the chemicals reaching the reaction chamber. When they analysed the reservoir fluid, they found it contained two different hydroquinones: 1,4-hydroquinone and 2-methyl-1,4-hydroquinone.

With over 2300 different scorpion species, scientists have so far only characterised the venom of about 1%

Athula’s team has ‘learned some tricks’ to modify the chemical composition of the beetles’ spray, but has yet to publish the details. Although the modification does not have practical applications, ‘it is fun to tinker with the perfect system,’ he says.

Benzoquinones are widespread in insect and arachnid defence, irritating vertebrates’ eyes and respiratory systems. They also have potential as medicines and have been found to have antimicrobial, anticoagulant and analgesic properties.

In 2019, a team led by Stanford University chemist Richard Zare and Lourival Possani, a biochemistry professor at the National Autonomous University of Mexico, reported two 1,4-benzoquinone compounds with ‘remarkable antimicrobial activities’. These compounds form when the venom of a rarely studied scorpion from Mexico called Diplocentrus melici is exposed to air.

‘Chemical weapons are not banned in the insect kingdom’

The researchers used electrical stimulation to get the scorpions to release venom. Initially a white, viscous liquid, the scorpion venom soon changed colour on exposure to air. Using NMR and mass spectrometry, they identified a red compound as 3,5-dimethoxy-2-(methylthio)cyclohexa-2,5-diene-1,4-dione and a blue one as 5-methoxy-2,3-bis(methylthio)cyclohexa-2,5-diene-1,4-dione. Tests revealed that the red substance can fight Staphylococcus aureus bacteria and the blue one Mycobacterium tuberculosis (TB).

Because they can only isolate extremely small amounts of the compounds from scorpion venom, the team have now found a way to make the substances in the laboratory using commercially available precursors. In tests, the blue compound is effective against multi-drug resistant TB and the team hopes that it will be used as a treatment. They are looking for pharmaceutical companies interested in running clinical trials on the antibiotics, says Lourival. 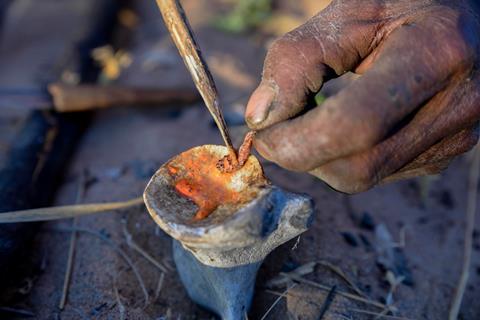 Venoms have been used in defence for centuries, but scientists are only just uncovering how they can be used to save lives

A sting in the tail

The researchers are still working on the benzoquinones, looking for activity against other Mycobacterium strains. They are also characterising venom from other scorpion species. They have plenty to choose from. With over 2300 different scorpion species, scientists have so far only characterised the venom of about 1%.

One species that is well characterised is the whip scorpion or vinegaroon. As the name suggests, the scorpions spray a strong 85% acetic acid mist at their predators, far stronger than household vinegar’s 5%. The strong acid mist can damage the exoskeleton of other insects. ‘As a result, they have essentially no predators,’ says entomologist Justin Schmidt, adjunct scientist at the University of Arizona.

One species that is well characterised is the whip scorpion or vinegaroon. As the name suggests, the scorpions spray a strong 85% acetic acid mist at their predators, far stronger than household vinegar’s 5%. The strong acid mist can damage the exoskeleton of other insects. ‘As a result, they have essentially no predators,’ says entomologist Justin Schmidt, adjunct scientist at the University of Arizona.

Known for his personal pain scale for stinging insects, Justin would put vinegaroons on his shortlist of favourite defensive insects. Other favourites include spiny caterpillars in the genus Lonomia that are ‘highly venomous when touched and can cause permanently frozen joints and sometimes kill people’, he enthuses. He is also a fan of assassin bugs, which spray venom into assailants’ eyes.

As Athula puts it, ‘chemical weapons are not banned in the insect kingdom’. His biggest work regret from his Cornell days is not having had the opportunity to study in detail the active compounds in the larvae of Bushman arrow-poison (Diamphidia) beetles. Perhaps not one to carry in your hand luggage.