How researchers are breathing new life into ‘dead’ rechargeable batteries 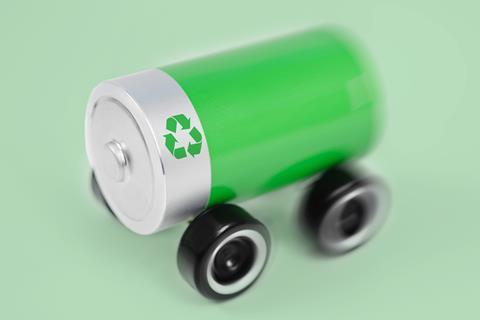 No rechargeable battery goes on and on and on indefinitely, so what happens to them at the end of their lives?

The 2019 Nobel prize in chemistry was awarded to John Goodenough, Stanley Whittingham and Akira Yoshino for lithium-ion batteries, developed in the 1970s and 80s. Today, these rechargeable cells power much of our modern lives – from our mobile phones, laptops and iPads to, increasingly, our cars.

In 2018, the global electric car fleet figure climbed to over five million and, according to the International Energy Agency, more than 130 million electric cars will be on our roads by 2030. Life cycle analysis shows that electric cars are a greener option than their petrol and diesel counterparts but that there is still room for improvement, particularly in how the batteries are disposed of at the end of their 10-year lifetime.

This article provides an excellent opportunity for pupils to consider the problems with the end of life disposal of their mobile phones and laptops. This links well with their study of life cycle assessments and using resources. It is also provides some context for their study of the chemistry of batteries.

‘Electric cars contain large battery packs weighing 300–400kgs each,’ explains Paul Anderson, materials chemist at the University of Birmingham. Soon there will be many millions of vehicle lithium-ion batteries reaching the end of their lives annually. ‘That’s an awful lot of waste,’ he says.

Estimates vary but less than 5% of spent lithium-ion batteries are currently recycled. Many end up in landfill or fester, long forgotten, in bottom drawers. They should instead be recycled in smelter furnaces where a pyrometallurgical process recovers valuable cobalt, nickel and copper, but even this approach is imperfect; the rest of the battery material is lost or ends up in low value slag used in construction materials.

This activity has two parts. The first looks at some of the chemistry of batteries. The second part links to the article. It considers the problems with mining lithium and with recycling batteries.

But some of these projects are also considering another of the three Rs: reuse. Over time, the amount of energy that can be stored in a lithium-ion battery reduces, and when they no longer hold enough power to get a car from A to B, they need replacing. ‘But if we use them in a different way, in applications that only require slow charging, discharging and lower power and energy, we can prolong the absolute life of the battery for longer,’ explains Birmingham’s Emma Kendrick. Potential second-life applications include community storage of renewable energy such as solar and wind. 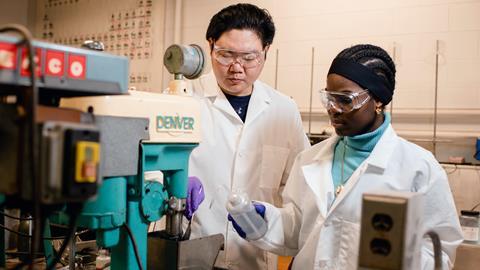 ‘To put a battery into a second-life application, you want to be really confident that it’s going to be able to perform,’ adds Birmingham’s Gavin Harper. Gavin, Paul and Emma are all working on the Reuse and Recycling of Lithium-Ion Batteries (ReLiB) project, funded by the Faraday Institution. Emma is also part of an Innovate UK-funded initiative called Reclamation and Remanufacture of Lithium-Ion Batteries (R2LIB). ‘When a battery comes into a recycling facility, we want to do a triage process to test it and find out if it is suitable for a second-life application or if it needs to be recycled,’ says Gavin. The Birmingham team are looking to identify suitable analytical techniques for doing this.

For batteries destined for recycling, the dream is to be able to slice cells open and reuse or remanufacture every component of the battery. ‘The transition metal oxide can be removed from the cathode electrodes and reclaimed for either direct reuse in a battery, reconditioning into a cathode material or reprocessing back into the cathode precursor salts,’ explains Emma. Likewise, the graphite on the anodes could be reused. ‘We’re also looking at if we can reclaim the plastics, the laminated aluminium and the separator to see if there’s any value in those waste streams,’ she says.

It is this large variety of components that makes lithium-ion battery recycling so challenging. Variety in battery design is another issue. ‘There are so many different chemistries, different materials being used, especially in cathodes,’ explains Linda Gaines, chief scientist at the ReCell Center, led by the Argonne National Laboratory in the US and funded by the US Department of Energy. ‘The cells and modules are all different shapes and sizes, and the battery pack is a different shape for each car,’ she adds. 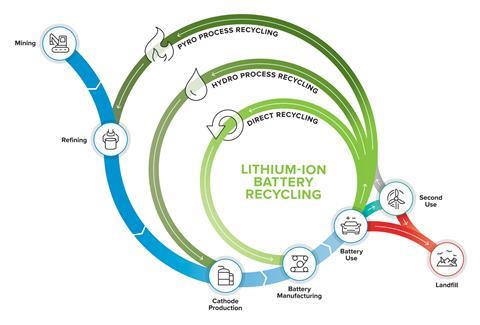 The life cycle of a lithium-ion battery

Paul believes that, eventually, regulations may be brought in to standardise lithium-ion battery designs to enable easier recycling. There is a precedent here, he explains, as the recyclability of 12V car starter lead-acid battery designs was legislated for. Today ‘lead acid batteries are one of the best examples of a circular economy,’ he adds.

In the meantime, a pragmatic approach to dealing with the variety is to shred everything and then sort out the resulting pieces. The ReCell Center and these UK projects are all designing both physical and chemical separation methods for shredded battery material, including sieves, magnets and leaching solutions.

And while the current focus of all three of these projects is squarely on electric vehicle batteries, explains Gavin, ‘some of the tools, techniques, technologies and innovations that are being developed could be applied to consumer electronics batteries in the future.’