Are your feeder primary schools building science capital like this prize-winning primary teacher? 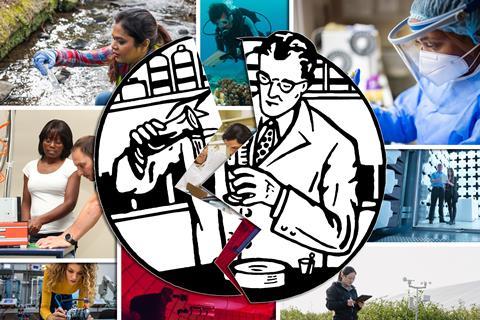 It’s widely accepted that ‘hands-on practical learning is fundamental to science teaching’; after all, science is something that you do. Since completing my primary PGCE specialising in primary science at Warwick University, I have been an advocate of practical, empirical learning.

I have seen first-hand how children enjoy getting stuck into new topics and discovering the world around them through hands-on learning. Learning in this way is fun and enjoyable, and children often develop a deeper understanding by leading their own learning. For example, as part of our year 3 light topic, children created their own puppet shows and soon found out which objects were opaque, and which were better at blocking the light to form shadows. And, through this exploration, they began to find patterns in how the size of shadows changed.

We had a day where children could dress up as scientists, and about 90% of them came as a mad professor – the stereotypical old male with crazy hair in a lab coat

Practical, hands-on science learning is the way of a scientist. In primary education, we try to develop enquiry skills so children can work as scientists. For example, we get pupils to carefully observe how plants change over time using equipment like magnifying glasses. These skills pave the way for children to understand how scientists work and, ultimately, the careers on offer in science.

While it’s important for children to develop science enquiry skills that will equip them to become scientists, this is not enough to prepare primary children for their futures in science. We need to ensure we develop their science capital alongside any other developments in their science journeys.

Children will only start to believe science is for them when they are exposed to and understand the vast range of science careers and diversity of scientists in the field. If we develop their science capital, they will have greater aspirations for science. In turn, they will begin secondary school with the necessary skills to work as scientists. This is vital. A 2013 ASPIRES report looking at young people’s science and career aspirations found that most pupils decide whether they like or dislike science by the age of 10.

This brings me to why it’s so important to introduce the idea that science is for all in primary school. In our school, it was common for pupils to have preconceptions and misconceptions about scientists’ profiles. We had a day where children could dress up as scientists, and about 90% of them came as a mad professor – the stereotypical old male with crazy hair in a lab coat. This clichéd view of a scientist was so deeply rooted across our community that we’ve subsequently hosted science weeks aimed at smashing the stereotypes, as well as developing children’s science skills and their aspirations to see becoming a scientist as achievable.

How we did it

So, what did we do to smash stereotypes, develop science capital and promote science for all? We held two whole-school science weeks and added opportunities to develop children’s aspirations and their science capital into the curriculum.

I coordinated a science week during 2020/21, where a series of visitors attended the school, including beekeepers, air ambulance first responders and university researchers. All classes engaged in virtual and in-person workshops with scientists such as electricians, geologists and doctors. The children could meet the scientists and experience their work first-hand; and they could see that these career paths are well within their reach. This was so important, because these were real-life experiences within a context where stereotypes were smashed. Children like to ‘see it to believe it’ and experiences have maximum impact when they are fully immersed in them.

A team of diverse researchers from the University of Birmingham and University of Loughborough, provided hands-on practical activities for the pupils. Year 2 pupils learned about the role of cellulose and completed a paper-making activity from recycled pieces, linking to their plant topic. Year 3, who were studying magnetism and rocks in science, completed an activity about recycling a lithium-ion battery.

The impact and success of the week was highlighted in a local newspaper and I received a Royal Society of Chemistry Education Prize for ‘Dedication, enthusiasm and effectiveness in the delivery of quality-first science pedagogy for children aged 4–9, while breaking down the stereotypes of the classic portrayal of a scientist’.

Developing science capital should be an ongoing development goal, for two reasons. First, we must keep learners up to date with the new developments in science to shape new science-related understanding, attitudes and skills. Second (and perhaps more importantly) as with all learning, we must continue to review, revisit and build on it.

This year, I chose the theme of farming (linked to the NFU’s STEMterprise) for science week, which had a wide and positive impact across the whole school. Farming may not be the first thing that springs to mind when you think about developing science capital and smashing stereotypes, but that’s exactly why I chose it. During the week, the children enjoyed learning about farming and the science, technology, engineering and maths (STEM) involved. At the beginning of the week, some children revealed a range of preconceptions and misconceptions about farming. Some were unsure of where food comes from and which animals are typically found on a farm. Most defined farmers as men who lived with a ‘farmer’s wife’. Although our school is in a rural area, Covid-19 clearly restricted the opportunities for children who may have previously visited farms.

The children explored farm life and the farm-to-fork process. Each year group designed and baked their own product, such as bread, crumble, pizza or butter. They also used design and technology skills to set up a farm shop. Again, the week was enriched by farmer visits: some bringing their tractors and produce; others their farmyard animals. These visits were instrumental in tackling common misconceptions and demonstrating that farming is about so much more than the Old MacDonald had a farm nursery rhyme that so many children learn from a very young age. The children really enjoyed meeting and feeding lambs and calves. At the end of the week, they had a far better understanding of the science behind British farming and agriculture.

Science shapes our world. By instilling the aspiration that science is for all into children, they will become the scientists who shape change.

Joshua PiggottJoshua is a primary school class teacher who leads on the science curriculum. He recently was awarded the Royal Society of Chemistry’s Early career prize for excellence in primary education.