The battle for magenta

Three years after the discovery of mauveine in 1856 by William Henry Perkin, the second commercially synthetic dye began production. Fuchsine, later named magenta to commemorate theBattle of Magenta in 1859, has, unlike mauveine, stood the test of time and is still used today. 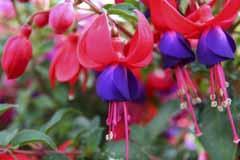 Fuchsine - named after the blue-red fuchsia

One of the most important discoveries in organic chemistry was that of the dye mauveine by 18-year old William Henry Perkin in 1856.1 This discovery alerted the chemical world to the rich and potentially useful store of chemicals present in coal tar, until then a nuisance byproduct from the manufacture of coke and coal gas. In scaling up his synthesis, Perkin laid the foundations of the industrial organic chemical industry which today gives us polymers, explosives, pharmaceuticals and much more.

But the manufacture of mauveine was not without its drawbacks, the most notable of which was the low synthetic yield - often no more than 5 per cent. The major products were a brown tarry material and a black insoluble powder. The former had no use at all, and the latter occasionally found application in printers' inks though mostly it was dumped.

The race for new dyes begins

Perkin's mauveine, however, stimulated a flurry of research to find other dye products in higher yields, which could be produced from coal-tar 'aniline' or other amines extracted from the tar.

Around this time several researchers were trying to synthesise amines - and derivatives of amines.

In 1856 Jacob Natanson, working at the University of Dorpat (now in Estonia) on his doctoral studies, found that heating a mixture of aniline (phenylamine) and 1,2-dichloroethane to 200oC gave a blood-red colour, but he did not appreciate that his product could be used as a dye.

Prompted by this work and that of the French chemist F. S. Cloez, who reacted aniline and 1,2-dibromo-ethane, August Hofmann extended his studies of amines and turned his attention first to reactions of aniline with monohaloalkanes and then to reactions of aniline with polyhaloalkanes. Reporting his results in 1858, he obtained a material which had a...

... magnificent crimson colour... [by] submitting a mixture of 3½ parts by weight of aniline and one part of bichloride of carbon [actually CCl4], both in the anhydrous state, for about 30 hours to a temperature of 170oC, the liquid will found to be converted into a black mass, either soft or viscid, or hard and brittle, according to the time and temperature.2

Notwithstanding many efforts, I failed in obtaining the new colouring matter in a state fit for analysis, and for the time abandoned the enquiry.

Although oxidation of 'aniline' was later shown to be much more efficient, it is possible to formulate a scheme (Scheme 1) to account for the production of fuchsine-like dyes using CCl4 under non-oxidative conditions, but the route is speculative.

Meanwhile, other chemists in their attempts to make coloured compounds modified Perkin's synthesis, the reaction between 'aniline' and potassium dichromate. They would have known that the latter was an oxidising agent, so they tried replacing this with other similar agents. 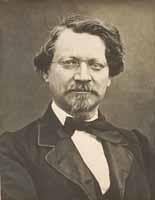 François-Emmanuel Verguin, an industrial chemist in Lyon, used stannic chloride (SnCl4) as an alternative oxidising agent and obtained not Perkin's product but a red dye in much better yields than the Perkin preparation.3 He joined forces with the dyers at Lyon: Renard (two brothers) and Franc, who obtained a patent for the process on 8 April 1859. They named the dye fuchsine. This could have been simply a play on words - reynard is French for fox, which in German is Fuchs - or it might have been a reference to the brilliant blue-red colour of the fuchsia flower, or indeed a combination of both. 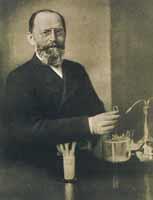 Stannic chloride was expensive so a search ensued for cheaper oxidants and success was achieved with other metallic salts, eg Hg(I), Fe(III) and Ag(I). For a while mercury(I) nitrate was commercially used. In the course of its action as an oxidant it was reduced to metallic mercury which was easily recovered for later (re)conversion into the nitrate salt.

However, the mercury salt was soon replaced by arsenic acid (an aqueous solution of As2O5), which was reduced to arsenious acid.3 Its use as an oxidant was commercially exploited in England by two former students of Hofmann, Edward Chambers Nicholson (working with David Price) and Henry Medlock who patented their work on 25 January and 18 January respectively.

These patents, and that of the Renard brothers, were the subject of litigation, yielding much employment and benefit to the lawyers involved. Finally, in 1865, the dispute was resolved and the production of fuchsine was taken up by many English firms, including that of the established dye manufacturer, Simpson, Nicholson and Maule.

For a brief period the dye was marketed under the alternative name of roseine, but was later christened magenta, to commemorate the 1859 Battle of Magenta (a town in northern Italy) in which the Austrians were defeated by a Franco/Sardinian alliance fighting during the Second Italian War of Independence. Presumably Simpson saw greater potential for sales in the French-speaking world rather than in the German-speaking one. 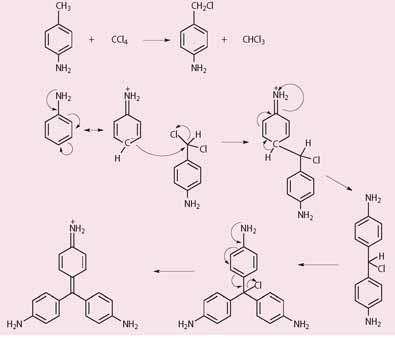 This synthesis was popular with manufacturers even though the toxic nature of arsenic had been recognised for years - it was freely used in the 19th century to kill flies, rodents and to a lesser extent, unwanted husbands.

In 1875, Chemical News promoted an alternative method to replace...

... the old arsenic acid process which, apart from the inconveniences (sic) it has caused to both manufacturers and consumers, has led to many lamentable accidents.4

Chemical News does not describe the nature of these accidents, but moves swiftly on to give details of the replacement process - one that had been patented some nine years earlier by the Parisian chemist Jean Théodore Coupier.

Coupier used an alternative oxidising mixture for the 'aniline for red' - nitrobenzene and iron chloride, the latter being prepared in situ from hydrochloric acid and iron powder. French dyestuffs chronicler Paul Schützenberger praised the method as giving a product of greater purity and yield than the arsenic acid method. Commercial manufacturers, however, complained that the hydrochloric acid corroded their iron retorts and that the method 'was not in use in any manufactory owing to the great cost and the bad quality of the product'. Eventually the method won the day, and as reported in Chemical News:

... being free from arsenic, these dyes are not only fitted for colouring sweetmeats, liqueurs, syrups and pharmaceutical preparations of every description, but may be used in many other industrial purposes where poisonous colours would be more or less dangerous, as in the staining of paper, paper-hangings [ie wallpaper] toys etc.

Soon, fuchsine was to be found in wines and sausages.

From the time of its discovery, chemists had endeavoured to understand the chemical constitution of fuchsine.

In 1862 Hofmann had wrongly suggested that it was a triphenylamine derivative. A year later he discovered that in fact pure aniline or pure toluidine (2-methyl phenylamine) did not yield fuchsine with the usual reagents, but a mixture of aniline and ortho - and para -toluidines was required. Distillation of the coal tar gave a benzene fraction that contained significant amounts of toluene (methyl benzene). The fraction was nitrated and the nitro compounds reduced to give aniline (from the benzene) and the toluidines (from the toluene).

Five years later, Freidrich August Kekulé suggested, correctly, that the methyl group of the toluidine held three phenyl groups together. Many others made contributions to the solution, but it was Emil and Otto Fischer who in 1878 succeeded in converting pararosaniline (one of the components of fuchsine) into triphenylmethane and solved the problem.

In the first step of the synthesis, the methyl group of p -toluidine is oxidised by SnCl4, As2O5 or FeCl3 etc to give 4-aminobenzaldehyde (4-aminobenzenecarbaldehyde). This aldehyde reacts with a molecule of aniline and a molecule of o -toluidine to give the leuco base that is protonated and then dehydrated to give fuchsine (1) - otherwise known as rosaniline or magenta - as shown in Scheme 2.5 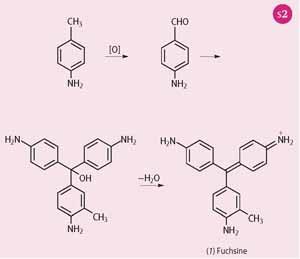 There is also a magenta III - sometimes called 'new fuchsine' - which contains three methyl groups and is prepared from an aniline-free mixture of o- and p-toluidines. These structures are tautomeric, ie the quinoid ring is not unique and can be drawn as any of the three phenyl rings.

A similar mixture of aniline and toluidines was necessary for the manufacture of Perkin's mauveine, but the formulae of fuchsine (1) and its relatives are very different from the formula of mauveine (2).

Uses of fuchsine - past and present

By the early 1900s the use of fuchsine as a dyestuff was growing. The Schiff's reagent, for example, the reaction product between fuchsine and sodium bisulfite (sodium hydrogen sulfite) was used to differentiate between aldehydes and ketones - aldehydes restore the colour to a solution of fuchsine (ideally rich in pararosaniline) that has been decolourised by SO2 gas, whereas ketones do not.

However, the reaction is complicated, and the magenta-'restored' colour of the positive test is not from the regeneration to the fuchsine dye. The first step is the addition of SO2 to pararosaniline, drawn in its carbocation form (Scheme 3), to give the colourless Schiff's reagent. The aldehyde adds to the remaining non-protonated amine groups to give a carbinolamine derivative that dehydrates to a di-imine. More SO2 adds to the C=N bonds and finally SO2 is eliminated from the central C-SO3 group in the product to generate the red-violet carbocation, the colour of which confirms the presence of an aldehyde.6 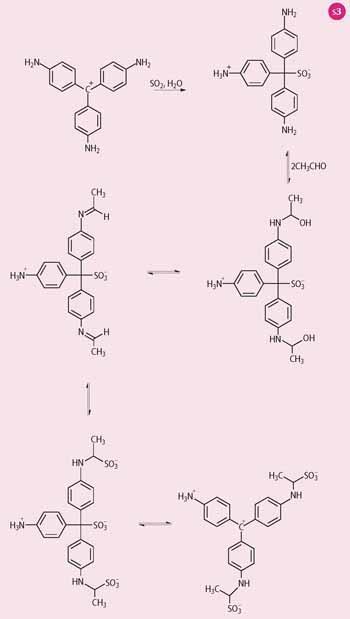 During most of the 20th century fuchsine dyes were used to colour foodstuffs, though there was a growing concern that aniline-derived dyes might not be as innocuous as originally thought. The last one, Food Acid Fuchsine (a sulfonic acid derivative of fuchsine), was withdrawn in 1984.

There remains the occasional use of fuchsine as a fabric dye, but it is more widely used today as a reagent in histological chemistry, especially as an indicator for the presence of glycogenic material in cells. This substance is oxidised by periodic acid (iodic(VII) acid) to give a product rich in aldehyde groups, and these react with Schiff's reagent to give the familiar magenta shade. The reagent, too, is used as the basis of the Feulgen test for observing the distribution of DNA in the chromosomes of dividing cell nuclei. A tissue section is first treated with dilute hydrochloric acid to remove the purine bases of the DNA, thus exposing the aldehyde groups of the sugar deoxyribose. The section is then treated with Schiff's reagent, which combines with the aldehyde groups to form a magenta-coloured product.

Chris Cooksey is retired and can be contacted at: dha@chriscooksey.demon.co.uk; Alan Dronsfield is professor of the history of science in the faculty of education, health and sciences at the University of Derby, Derby DE22 1GB.

We thank Dr David Leaback for recently interesting us in the history and chemistry of magenta.

We have not included a detailed preparation of fuchsine because the process is thought to be carcinogenic. Nevertheless, the preparation is included in at least one undergraduate textbook of the 1930s, which uses the nitrobenzene/HCl/iron powder method of oxidation.7 Readers wanting to practise dyeing with this material are advised to purchase the ready-made dye. 'Basic fuchsine' (pararosaniline chloride) is available at a cost of £17.20 per 25 g from Sigma-Aldrich, £36.80 per 100 g from Acros and £24.55 per 25 g from Alfa Aesar.

Unlike mauveine, the dye is very water-soluble and easily gives even tints without patchiness. Simply immersing a pre-wetted piece of silk in a cold dilute solution gives the characteristic rose-pink shade of the dye. Using more concentrated, hot solutions gives more intense colours, but the brilliance is lost. Wool (again, pre-wetted) is best dyed from very dilute solutions at about 65-85°C. Surprisingly, the dye shows a moderate fastness on cotton, but in this respect it is inferior to its application on wool and silk. Perkin gives suggestions for mordanting fuchsine onto cotton to resist the action of soapy water (using albumin or tannin/sodium stannate) and testing his suggestions could form the basis of school project work.8