The gunpowder trail and How Science Works 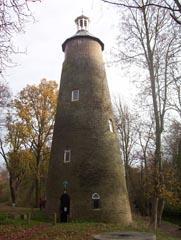 As an avid reader of Chemistry trails, I would like to share with you an interesting find of my own. Walking through River Crane Park situated on the London Loop between Whitton and Hounslow, I came across the Shot Tower, which was built by 'Mr Jacobs of Hanworth in 1826'. The tower is a remnant of the gunpowder industry, which thrived along the banks of this river. Lead was melted on the ground floor of the tower and carried to the top in metal carriers, at which point it was poured through a copper sieve. As the lead fell to the bottom, it formed into round balls or lead shot. At just 83 feet tall, however, there is some controversy as to whether this tower was high enough to make lead shot in this way - most shot towers were built over 120 feet tall. However, in its favour, the one in Crane Park is built on the river bank, and it is conceivable that the lead fell several extra feet into the river. I wonder if other readers have come across any interesting remnants of our chemical industrial past.

In response to David Read's concerns on the assessment of 'How science works (HSW)' in the new GCE A-level chemistry specifications (see Educ. Chem., 2007, 44 (6), 162) I would like to offer some reassurance to teachers.

The Assessment and Qualifications Alliance (AQA) welcomed the Qualifications and Curriculum Authority's (QCA's) review of the A-level criteria, to follow on from the changes introduced into GCSE in 2006. From the outset, we wanted to ensure that the qualification was interesting and enjoyable to students, while retaining the rigour demanded by universities and employers. Moreover, the specification was designed to ensure that there is recognition of the unique role chemists plays in improving the quality of life for the majority of people.

AQA's interpretation of HSW stems from our analysis of the way in which scientists operate. In chemistry this can often follow a cycle as follows: observation, theory or model to explain the observation, testing predictions that follow from the model. This leads to more observations that require refinement of the model and the cycle continues. It is our aim to embed HSW into all aspects of our written papers, rather than artificially tagging it onto questions.

I also note David Read's concerns on whether the specimen papers will accurately reflect the live papers. The specimens, which are available free-of-charge on our website, have been written by experienced examiners, and every effort was made to ensure their appropriateness and suitability. As is common practice, the specimen papers were not subjected to the same level of meticulous scrutiny that goes into the evaluation of real question papers and, as a consequence, can only be used as a good guide for the future. Furthermore, our mark schemes are always influenced by candidate response, and the early versions, like those used for the specimens, would be redrafted before use in a 'live' examination.

We believe that the first live question paper, available in January 2009, will reflect fair assessment of the new specification and teaching approaches. It is never our intention to disrupt a student's preparation by radically altering the approach used in papers. Indeed, we want a fair assessment of a student's chemistry skills, and much work is done to ensure that the language used in papers is as accessible as possible.

It may be of interest to teachers that AQA has recently agreed, in principle, an awarding body marked route for internal assessment to run in parallel to the ISA/PSA route, which is marked by teachers. These alternative routes should offer flexibility to teachers so that the best method of assessment can be chosen for their students (teachers should check the AQA website for details).

In response to David Read's article (see Educ. Chem., 2007, 44 (6), 162) I would like to explain OCR's (Oxford Cambridge and RSA Examinations) take on the teaching and assessment of 'How science works (HSW)' in its new GCE A-level chemistry specifications (Chemistry A and Chemistry B (Salters) for 2008).

We have updated the specifications to include: aspects of contemporary chemistry such as 13C-{1 H} NMR spectroscopy (in Chemistry A) and time-of-flight mass spectrometry (in Chemistry B); the use of GC-MS in modern analysis; development of the hydrogen economy; and the growth of degradable polymers. Environmental chemistry plays an important part in both specifications, including global warming and ozone depletion; changes in chemical philosophy within the Green chemistry movement (eg the idea of atom economy) with the need for the chemical industry to optimise the Earth's resources. 'How science works' is integrated throughout the teaching and assessment contexts.

We do not expect that a student learns a particular context; the emphasis will be on the essential chemistry underpinning the 'How science works' context and being able to apply it in an unfamiliar situation. Many questions incorporating 'How science works' can be found in the QCA approved specimen assessment materials on the website, but a couple of examples are:

The contemporary issues provide contexts for the assessment of applications, implications and ethical considerations of chemistry; and scientific knowledge in its social context. The essential skills of spectroscopic analysis are also covered along with consideration of the development of scientific models, such as the structure of the atom and of benzene. The tentative nature of chemical knowledge is demonstrated by the changing view of organising elements, leading towards the modern Periodic Table.

In short, students will develop up-to-date chemistry skills that they can then apply to a variety of situations, and learning how science really works.

A leading UK awarding body, dedicated to recognising achievement in learners of all ages