Darwin, Kelvin, Rutherford and the age of the Earth, Magical memories, Solution to solubility and Risk assessment 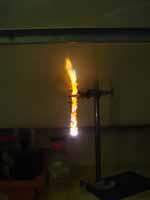 Before attempting the small-scale procedure for demonstrating the reaction between aluminium and bromine described in the recent Exhibition chemistry article (Educ. Chem., 2008, 45 (6), 170) school chemistry teachers in England, Wales and Northern Ireland, should read carefully Supplementary risk assessment SRA 04 which is on their CLEAPSS Science publications CD-ROM. The method states 'two pieces of aluminium foil (together weighing about 0.25 g) are separately rolled into "balls" so that they can be added to 1 ml of bromine in a borosilicate boiling tube (eg 150×25 mm). After an induction period, the exothermic reaction produces fumes of aluminium bromide. The reactants are disposed of by placing the boiling tube in a bowl of water, producing hydrogen bromide gas'. Aluminium powder should not be used in the reaction. 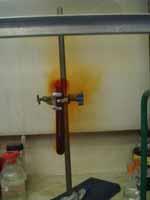 ... unlike that with powder

In his article Adrian Guy emphasises correctly that the fume cupboard used should be ducted (not recirculatory). However, with the quantities quoted and the fierceness of the reaction, some ducted fume cupboards may not be able to cope with the amount of smoke and vapour produced.

Darwin, Kelvin, Rutherford and the age of the Earth

One hundred and fifty years ago a paper by Charles Darwin (1809-82) was read at the Linnean Society, London, leading to his publication in 1859 of On the origin of the species by means of natural selection (1859; John Murray, London), one of the most influential books ever published. This year marks the sesquicentenary of its publication and the bicentenary of Darwin's birth. Famously he surmised that the Weald (southern England) must be at least 300 million years old. He was much influenced by the realisation of the geologist Charles Lyell (1797-1875) that the Earth was, on geological grounds, many millions of years old; Lyell was one of several who persuaded Darwin to write his book. In 1862 Lord Kelvin (William Thomson (1824-1907)) estimated the Earth's age as between 40 and 400 million years on the assumption that it had slowly cooled from initial molten rock; later (1899) he lowered this to 20-40 million years.

In 1904 Ernest Rutherford at the Royal Institution, London, suggested that radioactivity drove the internal heat of the Earth rather than internal cooling, concluding that the Earth was much older than Kelvin's date, but gave no estimated age; Lord Kelvin gracefully acknowledged his reasoning. Subsequently in 1907 Rutherford estimated the age of some primary terrestrial radioactive minerals as between 500 to 1000 million years.

I very much enjoyed the November issue of Education in Chemistry. Peter Child's Chemlingo on flocculation and precipitation and the photo of lead(II) iodide (Educ. Chem. 2008, 45 (6), 166) took me back 50 years.

I recall how my professor mixed two colourless solutions - lead(II) nitrate and potassium iodide - in a test tube and produced the glorious yellow lead(II) iodide precipitate. He then heated the mixture and the precipitate dissolved, giving a colourless solution: wow! As the test tube cooled brilliant yellow spangles began to form, and these slowly fell down through the solution like golden snow flakes: beautiful! And he could repeat this amazing sequence of reactions again and again: quite magical.

Nowadays we must avoid magic and ask what theory can be learned from such a demonstration. Perhaps we might mention that Ksp is temperature dependent, and that colour comes from transfer of electrons from anion to cation. One might ask students to predict what happens with Pb2+ and Cl-, and Hg2+ and I-. (See A. I. Vogel, A textbook of macro and semimicro qualitative inorganic analysis (Longmans) for the answer.)

In a recent lesson a student asked: why does the solubility of sodium sulfate(VI) rise to a maximum at 35ºC and then drop as the temperature increases?

The endothermic or exothermic nature of a compound's solubility is determined by a balance between lattice enthalpy of the solid and hydration enthalpy of the ions. If the solubility is exothermic then an increase in temperature will tend, by the Le Chatelier's principle, to decrease the solubility. Together with this is entropy. The entropy change normally favours dissolution and from:

an increase in temperature will make the TΔS term more favourable as the temperature goes up.

So it is a balance between enthalpy and entropy that determines solubility.