The 'Farnborough Extended Project', Maintain lattice energy equilibrium and Quick demo - it's in the bag 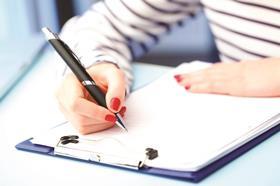 In response to Jeremy Hinks' Endpoint in the last issue (see Educ. Chem., 2009, 46 (6), 192), I would like to share our experience at Farnborough sixthform college of the 'extended project' (EP). Every year some of our brightest students give up part of their summer to research and write a 5000-word thesis.

While coursework can give students the chance to extend themselves, in the past more able students have been marked down for working at a higher level than required. We wanted to give students the opportunity to work at the limits of their own competence, not only to process information, but evaluate and be critical of their own findings. The 'Farnborough Extended Project' provides students with an opportunity to escape from the straightjacket of the examination specification by extending their learning in a direction of their own choosing, at the interface between two of their subjects.

The process starts in June, after the AS exams. Independently, students choose the topic and approach a teacher to be their supervisor. Supervisors do not teach any content but act as a mentor. During the summer holiday, students research and plan their essay. In September, they discuss with their supervisor what they have done and produce a first draft, which is finalised by November. They end up with a bound, university-style thesis of their work, which is presented at a ceremony at the end of term by a leading national figure.

This summer I supervised two students: one investigated 'chemical evolution theory' and whether it is responsible for life on Earth; the other took on entropy and how disorder drives biological processes. Reading and marking these projects has taken me out of my personal comfort zone, and the students (and I) were working at the limits of our competence.

One critical difference between the Farnborough Extended Project and the new EP qualification, the AS level, is that at Farnborough we see it principally as a formative process, not a summative one. So instead of a grade, we give written formative feedback, pointing out areas done well but also what could be improved in a student's future dissertations. Few of them need yet another AS level.

Feedback from our students suggests they find the experience motivating and rewarding. They gain valuable writing and investigative skills, as well as confidence in their own abilities, all of which puts them in good stead when they go on to university.

This year nearly 200 of our students completed an essay, which carries no UCAS points, just for the intellectual challenge. The evidence from our extended project clearly refutes the oft-cited complaint that today's students are only interested in grades, incapable of independent research and cannot write well. Every sixthformer would benefit from this experience and, with such a small input required from the supervisors when compared with the educational benefits of the course, the question is not why, but why not?

I enjoyed reading Chas McCaw's article on the Madelung constant (Educ. Chem., 2009, 46 (6), 179). My only criticism is the statement near the end of the first page. I quote: 'Neglecting the repulsive interaction at short interionic distances...'. One cannot reject repulsive forces because this gives a formula for lattice energy (immediately below the quote) which has only an attractive energy term. Lattice energy implies that the system is in equilibrium, when the attractive forces and the repulsive forces are equal. This means that we must include a repulsive term (assumed to be proportional to 1/rn in the Born-Landé equation and an exponential function in the Born-Mayer equation). The equation in the article implies that ionic crystals are black holes.

The article also raises the question at what point does physical chemistry become physics. Born was a physicist and used an idealised hard sphere model for his calculations. As chemists we realise that the calculation of lattice energy (using one of the Born equations) has to be modified in at least half a dozen ways if we are to get any sort of agreement with lattice enthalpies determined using the Born-Haber cycle. I take the hard sphere model for sodium chloride with a large pinch of salt.

Bagfuls of chemistry, before...

Quick demo - it's in the bag

As an add-on to my recent Exhibition chemistry article on the reaction between hydrogen and chlorine (Educ. Chem., 2009, 46 (6), 170) teachers might be interested in an alternative approach to demonstrating the photochemical, free-radical substitution reaction of bromine and alkanes. Traditionally, to show this reaction one adds a drop of bromine to a boiling tube of hexane and swirls the mixture in sunlight for several minutes. The problem here is that the glass of the Pyrex tube and the classroom window absorb certain frequencies of uv light, which slows the reaction.

However, try repeating the demonstration by adding five drops of bromine to 30 ml of hexane in a plastic food bag and holding this in the sunlight. The reaction is complete in ca 30 s (even in late September sun). You can then open the bag and test for the presence of hydrogen bromide using damp blue litmus paper, and/or by introducing a glass rod which has been dipped in concentrated ammonia solution.