Philately and chemistry and Blood - be aware 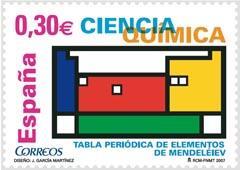 Over the years there has been a number of postage stamps issued to celebrate scientific discoveries or honour well-known scientists and these can be used as simple yet powerful teaching tools in the classroom.1 I use a chemistry-related postage stamp from Spain (pictured right) with my first-year undergraduate students to introduce several concepts related to the Periodic Table. I set this as a collaborative learning activity (with groups of three students) and discuss with the students their answers. This example could also be used as a problem for students to tackle individually or to start a discussion during a lecture.

I begin by telling my students about the postage stamp, which was issued in Spain on 2 February 2007 - the Spanish Year of Science. Inspired by the stamp, I set them three challenges.

By working individually, in groups or by class discussion the students arrive at the solutions.

This example shows how a simple postage stamp can serve as inspiration for questions on topics in chemistry. Discussions of this kind may encourage students to explore topics in more depth. (Note: this stamp was designed by the Spanish chemist Javier García Martínez. He was inspired by the work of Piet Mondrian, a Dutch neoplasticist painter (1872-1944). )

Acknowledgement: I am thankful for the support provided by the Universidad Politécnica de Madrid under the project, New methodologies for improving the teaching-learning process in chemistry.

Readers of Colin Baker's excellent Exhibition chemistry article on how to prepare his 'blood mousse' demonstration should be aware that appropriate precautions need to be taken when handling mammalian blood.4 The use of blood is not banned in schools or colleges but there are hygiene and disposal considerations which need to be addressed and followed. Subscribers to CLEAPSS can find this information in section 14.4 of the CLEAPSS laboratory handbook.

In addition, I have done similar hydrogen peroxide decompositions (with other catalysts) and by having starch/iodide paper in various positions above the foam, I have found that hydrogen peroxide aerosol is projected into the atmosphere during the reaction. This is why CLEAPSS advises that the room is well-ventilated.

In Baker's demonstration the aerosol will be contaminated with mammalian blood. Open vessels, in this case, should not be used, so the reaction should be done in a fume cupboard or inside a large, transparent plastic bag.

Although it would not make such a brightly-coloured demonstration, liver is a more acceptable source of catalase.