Is the thermite reaction safe? 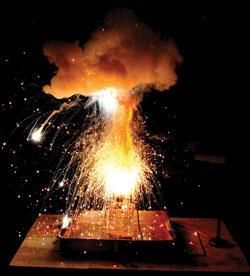 The thermite reaction is spectacular and highly exothermic

It is with deep concern that I respond to safety hazards in your published thermite demonstration (Education in Chemistry, January 2011, p10).

The thermite reaction product should never be directed into water or wet sand as an explosion may result. This is detailed in a note in Prudent practices in the laboratory: handling and disposing of chemicals.

The molten iron produced by the reaction should be directed into a metal bucket of dry sand. Also, it is best to perform the thermite reaction outside on a concrete surface, protected from any wind, rather than in a classroom, with proper safety shields, and with students and observers at a safe distance of 10 m, rather than 5 m recommended in the article.

Furthermore, the reaction product remains hot for at least 15 minutes and should not be handled until it is cooled to room temperature. If you want your students to examine the product, pass around a piece of the product from a previous thermite reaction.

With such small quantities of thermite mixture, as described in the article, the risk of an explosion as described is minimal. That said, there is obviously a risk and that is why a safety screen is used and pupils are 5 m away. Again, with the quantities involved 5 m is more than adequate and having performed this method, along with others in my department in my present school and schools previously over ten years there has never been the slightest hint of danger to the class.

Chemistry labs don't have smoke alarms and so this is not an issue normally. However, the thermite demonstration as described in the article would not be appropriate for a normal classroom with a low ceiling and a smoke alarm.

Dropping the molten iron into water is a great method of producing a ball of molten iron that has not fused with sand, thus retaining its metallic appearance and one which cools in around 30 seconds and is safe to handle.

I expect the demonstration referred to, which caused so many injuries, was performed on a much larger scale - the method implies huge quantities; 'a clay flower pot held over a small beaker of water' - and so I am not surprised an explosion was caused. Interestingly, I watched an episode of MythBusters where large quantities of thermite mixture were ignited over ice resulting in a gigantic explosion, but again this is nothing like the demonstration written for Education in Chemistry. I will go so far as to say that the safety precautions are more than adequate for the demonstration performed as per my method and that I am very happy with the current safety precautions.

However, I take comments such as these seriously and will investigate larger scale methods to see if I can produce an explosion - this would make a great demo to do in the large fields surrounding our school.

Prudent practices in laboratory: handling and disposing of chemicals