Concrete chemistry, propagating a myth and numbering groups in the periodic table 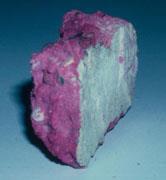 I note that several of the publications supporting the new GCSE science specifications suggest pupils should make concrete using various mixes of sand and cement and then test its strength. If doing this, it would be a pity not to take the opportunity to show quite a spectacular demonstration involving neutralisation and rates of reaction.

Take a fist-sized lump of concrete. If you look, you will find them lying around all over the place. Pour phenolphthalein solution (highly flammable) over the lump. Nothing happens. Cries of 'Boring!' from the class. Place the concrete lump on the floor and, wearing eye protection, hit it hard with a hammer. (The bang will wake up the bored class.) Quickly pour phenolphthalein over the newly-exposed surface. The concrete goes bright pink. The pink colour fades in a few minutes.

Thus the surface gives a colourless (neutral) result when tested with phenolphthalein. But carbon dioxide penetrates inside the concrete only very slowly. If you look carefully at the pink surface you will find a thin layer near the original exposed edge, perhaps a few millimetres thick, which is not pink, showing how deeply the carbon dioxide had penetrated. The depth of penetration can indicate when the concrete was made - so forensic scientists can work out when the body was buried under the patio. Other indicators can be used for this demonstration but phenolphthalein is the most spectacular.

In the latest Exhibition chemistry series,1 Colin Baker describes the precipitation of red copper(i) carbide by passing ethyne into an ammoniacal solution of copper(i) chloride:

Numbering groups in the Periodic Table

I wonder if I can have some advice about buying Periodic Tables for use in school, in particular the poster type. We can now buy Periodic Tables with the Groups labelled in several different ways. Our exam board uses the Groups I to VII and 0 format but lately some catalogues have come out with the Groups labelled 1 to 18. Please could you explain why this new method of labelling has come about and whether we ought to make plans to change our posters in the future.

For the GCSE Science specifications introduced in September, the Royal Society of Chemistry (RSC) recommended to the Qualifications and Curriculum Authority (QCA) that the Periodic Table appears with Groups labelled 1-7, and 0 to show the number of electrons in the outer shell of the elements of each Group. In the current review of GCE AS- and A-levels for science the RSC has put it to QCA that the Arabic numerals 1-18 recommended by IUPAC are also included.

And why did the two labelling methods arise?

Historically the transition metal groups had Roman numerals (thus titanium was IV). So to distinguish, for example, titanium's group from the carbon group the two groups were called IVA and IVB. Unfortunately, for some Groups American and European usage of A and B differed. The use of Arabic numerals 1-18 meant both sides had to give way to reach a universally accepted solution.