Mythbusting, Recommending IGCSE, Corrigenda, Valency and The case of the missing film 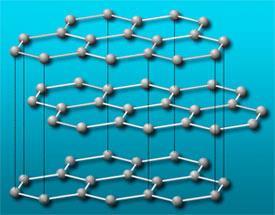 It seems timely for me to write about a couple of carbon myths that still find their way into textbooks and should be laid to rest. I would like teachers to be made aware of these.

The first myth is that that graphite is a lubricant because the van der Waals forces between the graphene layers are weak and this allows the sheets to slide over one another. This myth led us to suggest, in 1985, that C60 might be a great lubricant - after all, if graphite is a lubricant then surely round graphite would be super-lubricant. In fact, the first experiment I carried out when I, at last, had a sample of solid C60 in my hands, was to press it with a spatula onto a piece of glass. I was puzzled as it responded just like a lump of grit. I was later informed that graphite is, in fact, not a lubricant in a vacuum when the intercalated gases present in air have been extracted from between the graphene layers. It is for this reason, I understand, that graphite is not used on the Space Shuttle. I was told, and I have no reason to doubt it, that this was discovered during the War (The Second World War rather that the Bush/Blair one). As the bombers and fighter planes went to higher and higher altitudes, the graphite brushes on electric motors became abrasive and wore out quickly.

A second myth which is still prevalent in astrophysical discussions about interstellar carbonaceous microparticles, is that graphite micro- and nano-crystals consist of mutliple layer graphite sandwiches, somewhat like the square black-and-white layered Licorice Allsorts that British kids used to eat, before they were affluent enough to buy Mars bars. In fact, when carbon atoms nucleate bottom-up, they form the most stable form of small clusters; from 60 to hundreds and perhaps thousands of atoms these are fullerenes and/or multiple fullerene onion-like spheroidal particles. It is only on a large bulk scale that the extensive stabilization due to inter-graphene-layer interactions can outweigh the edge instability of the dangling bonds of the graphite sheet edges.

I read Stuart Walker's article titled Using valency to stretch Year 7 with great interest. Like Stuart, I am a great advocate for pushing able Key Stage 3 students beyond what is expected from most of the standard text books.

Having taught at a Grammar School for the last two years, I have found that students approaching the end of Year 7 or beginning Year 8 are quite capable of understanding the concepts of valency to determine the formulae of simple compounds. Personally, I prefer to teach formulae using the idea of balancing charges on ions. In Year 9, I build on this skill by teaching some of the more challenging examples using ions with more than one element present (e.g.  the ammonium ion) and the use of brackets. However, it is incredibly frustrating that this important skill is more or less untested at Key Stage 4. Consequently, I find myself wasting valuable lesson time teaching Year 12 students how to write formulae all over again, as their powers of recall don't quite stretch to two key stages!

Over the summer holiday I took the time to take a look at chemistry exam papers from the IGCSE courses on offer and was pleased to see that the use of formulae and the balancing of equations appears to be much more rigorously tested in comparison with the recently lambasted, watered-down papers offered by OCR and Edexcel. It is such a shame that our young students lose impetus when making the transition from Key Stage 3 to Key Stage 4 and I would recommend all Heads of Science to seriously consider an IGCSE course as the answer to this problem.

In my recent article entitled Lead in the environment  the caption for Fig. 1 should read include the text "Redrawn from data in Ref. 4."

In addition, the key to Fig 2 was omitted, this should read:

I am sorry if I gave the impression that teachers should introduce valency in connection with electronic theories of bonding as inferred by Stuart Walker in his Endpoint. I agree with him that teachers should introduce the concept before these theories. Valency is a way of rationalizing the atomic composition of compounds as determined experimentally, and is a simpler concept than electronic structure.

The case of the missing film

In chemistry at school we used to watch a video called The case of the sulfuric acid plant. Aimed at O-level/GCSE students, this 15 minute film described the whole process of sulfuric acid manufacture, but was very entertaining because it was narrated by John Cleese, and included an animated version of him (animations by Tony 'Morph' Hart), with a cartoon dog called Digby.

I have since found out that the film was produced by ICI in 1976. I cannot find an electronic version of this film and there is limited info on the internet.

Does anyone else remember the film? Or perhaps someone has a copy?

The case of the missing film