A flavour of Chemistry Week '09

In November the general public was treated to the wonders of chemistry in a series of events with a food theme for the Royal Society of Chemistry's (RSC) Chemistry Week. Chemistry Week is organised by the RSC's network of local sections.

Read on for a brief digest of the week's events... 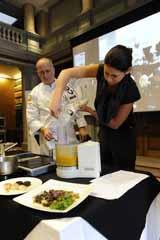 Dinner in the Chemistry Centre

The RSC's new ChemistryCentre in London hosted events throughout Chemistry Week, including lectures on the chemistry of food and its components and the history of curry in the UK (both talks are available to watch online at: www.rsc.org/chemistrycentre). Education in Chemistry visited the centre to get a taste of its first event for schools Sizzling science, a demonstration lecture run by the MRC's Human Nutrition Research Centre. Over 200 local students and their teachers watched Grant Hawthorne of the Craft Guild of Chefs prepare a three-course meal using some tricks of the trade used by professional chefs, such as slow cooking vacuum-packed lamb in warm (58 °C) water to break down proteins and tenderise the meat before searing it in a frying pan. As Hawthorne prepared each dish nutritionist Claire Mac Evilly explained the important vitamins and nutrients the ingredients - scallops, potato, cauliflower and mango - provide in our diet.

In Cambridge a team of years 9-13 students from Abbey College, City of Ely Community College, Witchford Village College and The King's School Ely did their bit to promote the general public's understanding of the science behind flavour by getting passers in the city's Grand Arcade to try their Heston Blumenthal-inspired Stilton cheese and chocolate truffles. 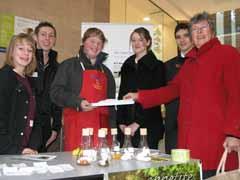 The students explained to the public the chemistry of flavour and the importance of smell as a flavour receptor. Blue cheese and dark chocolate share some of the same flavour notes, which can be identified using gas chromatography. These common flavours mean the foods complement each other. Although initially well received, the public's enthusiasm for the truffles was a little mixed once they knew the ingredients.

The students also invited shoppers to compare the scents of esters and natural essences, and they used the contrasting odours of roast and boiled carrots to illustrate the solubility of flavour components. To illustrate the limitation of the tongue in taste, participants were fed plain crisps while smelling cheese and onion crisps.

Throughout ChemistryWeek, the Sheffield RSC local section organised several events at the University of Sheffield's chemistry department. Students from local schools were invited to the department's laboratory for schools to take part in practical activities organised by Dr Sara Bacon and Will Davey of the university's chemistry schools liaison team. 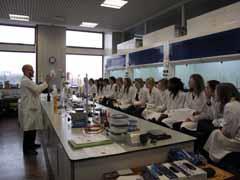 Among the activities on offer students got to extract natural products from cloves and nutmeg, which provided them with an opportunity to use equipment they had not used before and to practise techniques - steam distillation, separation, recrystallisation and rotary evaporation.

One of a series of food-theme events run during the week saw the chemistry department's Andrew Ross and Dr Julie Hyde entertain year 8 students from local schools with their talk You're as cold as ice cream. Sponsored by Our Cow Molly Ice Cream Company, a local dairy farm, the demonstration lecture focused on the history of ice cream and how it is made. Using demonstrations of the properties of ice, solid carbon dioxide and liquid nitrogen, the chemists showed how forming the perfect sized ice crystals by careful cooling of the ice cream mix is key to making a smooth, quality ice cream. At the end of the talk the audience compared the sponsor's ice cream with ice cream prepared by the chemists using liquid nitrogen to cool a liquid mix supplied by the sponsor. Based on feedback, the chemists scooped the award for best ice cream.

The science of chocolatewas on the menu at the University of Birmingham's school of chemistry where chemical engineer Professor Peter Fryer revealed its secrets to 350 local sixthform students and their teachers. His talk, Chemical engineering of creme eggs, gave an insight into the art of turning cocoa beans into chocolate - processing, blending, conching (slow mixing) and tempering to produce the finished product.

Key to producing quality chocolate is to control the temperature throughout the whole process. According to Fryer, of the six polymorphs of chocolate that exist in the range 10-30 °C, only the fifth structure has the texture and properties that give Cadburys chocolate its familiar taste. 'The temperature at which crystallisation occurs is paramount - chocolate should melt in the mouth. Get the temperature wrong and chocolate can have a sandy texture when eaten'.

Over 200 visitors to Newcastle University's school of chemistry during Chemistry Week got to make ice cream as part of Chemistry in your shopping basket, a demonstration lecture run by Anne Willis and Peter Hoare of Northumbria and Newcastle Universities respectively. They showed how four chemicals - sodium chloride, carbon dioxide, crude oil and nitrogen - are vital in the production of many products found in the supermarket.

Students discovered that sodium chloride is the common chemical used in the production of toilet paper, bleach, soap and margarine - electrolysis of sodium chloride solution is the source of chlorine used in making paper and bleach, hydrogen for making margarine and sodium hydroxide is used to make soap. The students then used a salt-ice bath to make their ice cream.

Among the series of events run at the University of Leeds two groups of Key Stage 4 and 5 students took part in The sweet smell of success, a demonstration lecture run by food scientists Drs Lisa Lang and Caroline Orfila. The interactive talk explored the role of the sense of smell in how we taste food.

The students tried chewing on a jelly-bean while pinching the nose, then releasing the nose to reveal its true flavour. Other activities included a 'food and mood' experiment in which the students learnt how each smell triggers a specific neurological response that our brain interprets into physiological responses, memories and emotions. This is why some smells make our mouth water and make us feel hungry and happy, while other smells make us feel uneasy and respond repulsively. The students also found out about the genetics of flavour perception, seeing examples of genes involved in the gustatory system, which makes us all taste things differently.

Before leaving students were asked to try an activity at home - to produce a food that includes carrot, tomato, raspberry and chocolate. Although a bizarre combination, the ingredients all contain the hydrocarbon limonene so they should go well together. Why not give it a go.