A green cap for landfills 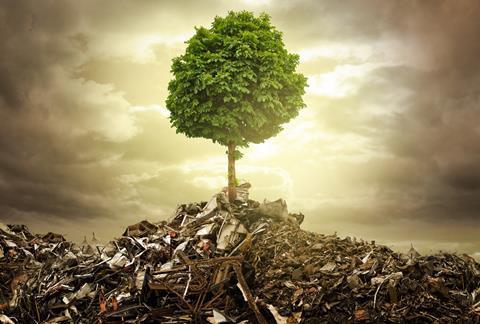 Australian scientists have tested a novel approach to dealing with the greenhouse gases methane and carbon dioxide released from landfill sites.1

Methane and carbon dioxide are released in huge volumes from landfill sites around the world. The gases are the products of the biodegradation of organic matter, a process which is accelerated when water comes into contact with the buried waste. The usual approaches to controlling landfill greenhouse gas emissions involve capping the landfill. According to Kartik Venkatraman and Nanjappa Ashwath of the department of molecular and life sciences at Central Queensland University in Rockhampton, Australia, a standard approach would be to cover the landfill with compacted clay to prevent water trickling into the landfill and speeding up the organic decay process.

However, the researchers point out that tests with the clay-capping approach in the US have not been particularly successful at reducing emissions. The main problem is that in arid regions the clay dries out, opening up cracks that then allow water to trickle into the landfill. This problem can be compensated for by installing a methane collection system, but to be viable the level of methane release has to reach a threshold that is not always achievable in remote landfills across Australia.

So the Australian researchers trialled a more environment friendly approach which involves growing plants and trees on the site. This process of 'phytocapping' provides a way to absorb the released gases, intercept any rainwater as well as offering a more aesthetic alternative to managing landfills. The phytocap involves planting some 19 tree species, including acacias, figs, eucalyptus, and other Australian native species, in top soil placed on the landfill.

Working in collaboration with Rockhampton Regional Council and Phytolink Pty, the researchers tested the phytocapping approach at Rockhampton's Lakes Creek landfill. Preliminary results suggest that phytocapping reduces the release of methane from a landfill four to five times more effectively than a conventional, un-vegetated cap. The team also found that using a cap of planting soil some 1.4 m thick cut methane emissions by almost 50 per cent more than with a phytocap that was half as thick.

The team explains that phytocapping should ultimately reduce the carbon footprint of landfill in regions where alternative waste processing is untenable. The team's estimates suggest that the process can halve the overall cost of landfill remediation. Moreover, by providing a more ecological approach, the method also introduces another factor into the equation - species biodiversity.