Aliens get a nitrogen fix

Saturn's moon Titan has an atmosphere rich in nitrogen 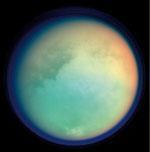 Saturn's moon Titan has an atmosphere rich in nitrogen, so scientists hope that it might act as a model system for terrestrial chemistry just before life began on Earth. Now, new findings from University of Arizona have recreated atmospheric conditions on Titan and demonstrated how atmospheric nitrogen might be naturally incorporated into organic macromolecules in the air.

'Titan is so interesting because its nitrogen-dominated atmosphere and organic chemistry might give us a clue to the origin of life on our Earth,' explains team member Hiroshi Imanaka. Nitrogen is an essential element of life but Titan's smoggy, orange hue also suggests its atmosphere is rich in organic molecules. Imanaka suggests that particles in this Titanic smog might settle on the surface and be exposed to conditions that could lead to life, in an analogous manner to early Earth.

Of course, nitrogen and smog alone are probably not sufficient for life to emerge, as the relatively unreactive nitrogen molecules must first convert into chemically active molecules to drive the necessary prebiotic reactions.

Now, Imanaka and Mark Smith have found that a nitrogen-methane gas mixture that is similar to Titan's atmosphere can convert into many nitrogen-containing organic molecules under high-energy ultraviolet light which is just like the solar radiation that affects Titan's atmosphere. The findings do not suggest that life actually exists on Titan, but provide a tantalising clue as to the kind of chemistry that might occur on this and other worlds. The observations could also help scientists plan future missions into space that could search for direct evidence of extraterrestrial life.