Alligator's blood is a potential source of new drugs 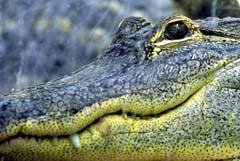 It's perhaps not the first place you would think to search for powerful antibiotics, but alligator's blood could be a great source of novel compounds that could defeat strains of bacteria resistant to conventional antibiotics. Biochemist Mark Merchant of McNeese State University in Lake Charles, Louisiana, has investigated a range of proteins found in alligator blood that might one day be used to fight serious infections associated with diabetic ulcers, severe burns, and so-called 'superbugs', such as multiple-resistant Staphylococcus aureus (MRSA), as well as fungal infections such as Candida albicans.

Merchant worked with Kermit Murray and Lancia Darville, both of Louisiana State University in Baton Rouge, to collect blood samples from American alligators. They then isolated disease-fighting white blood cells (leucocytes) and extracted the active proteins from those cells using two dimensional gel separation and mass spectrometry. In laboratory tests, tiny amounts of these protein extracts were found to kill a wide range of microbes, including MRSA and six of eight different strains of C. albicans.

Reporting the work at the American Chemical Society annual meeting in April, Merchant said, 'We're very excited about the potential of these alligator blood proteins - which might be called alligacins - as both antibacterial and antifungal agents'. Previously, Merchant and his colleagues have demonstrated that alligators have an unusually strong immune system that is very different from that of humans. Alligators can fight microorganisms such as fungi, viruses, and bacteria without prior exposure to these pathogens. This evolutionary adaptation means wounds heal rapidly in alligators, which is crucial to surviving fierce territorial battles, and could help explain why these creatures have survived for millions of years.

Earlier studies had also hinted that these blood proteins could help combat human immunodeficiency virus (HIV), the cause of Aids. The scientists are now working to identify which proteins are the most effective bug killers and which aspects of their structure are responsible for their antimicrobial activity.